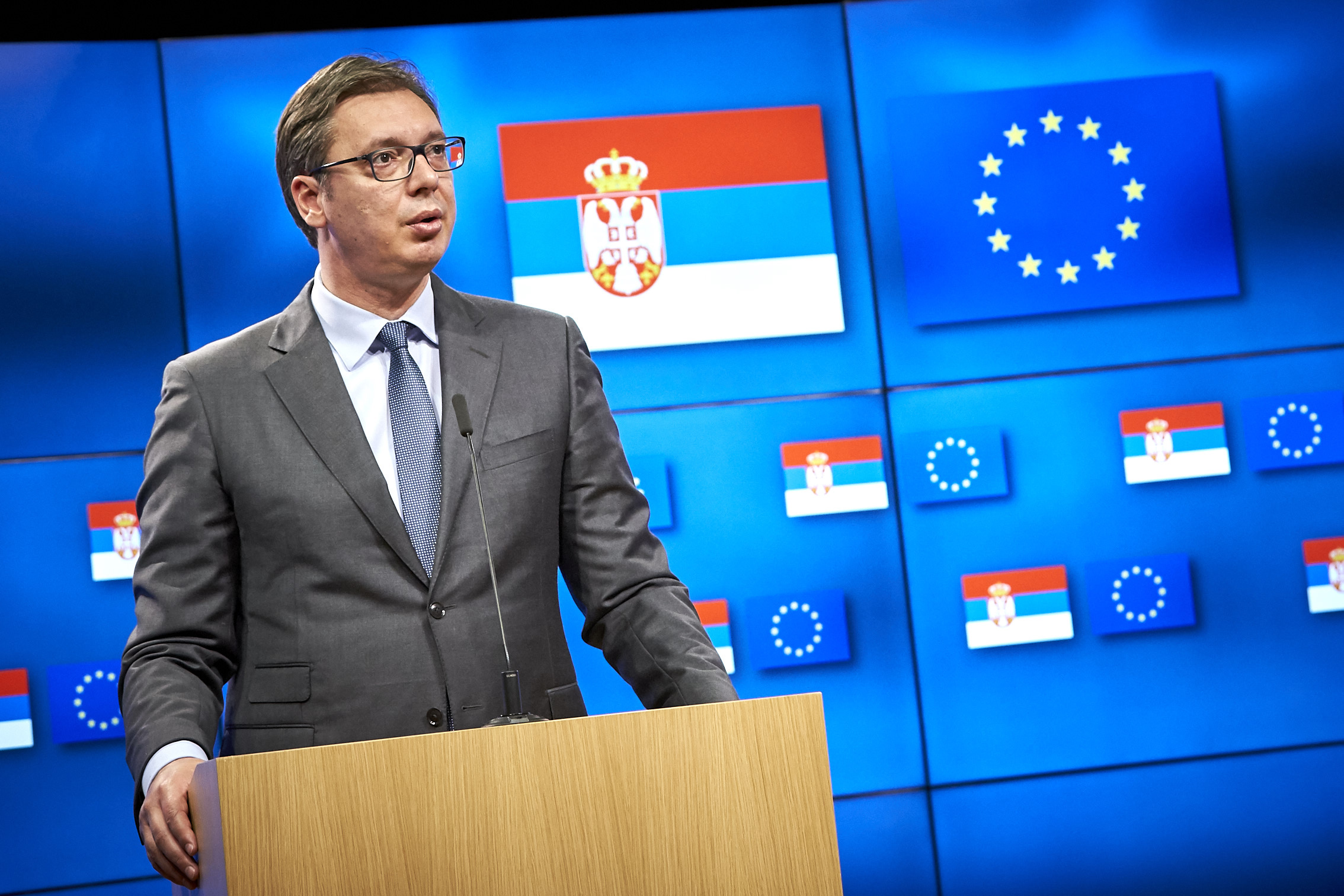 Namely, the implementation of the Brussels agreement from 2013, and particularly the parts related to missing persons (Kosovo Liberation Army archive) and establishment of the Community of Serb Municipalities, is completely blocked. The Washington Agreement from 2020 envisages resolution of the dispute regarding the utilization and management of the Gazivode Lake. Furthermore, the US have recently made a feasibility study for the solution to the Gazivode Lake dispute. Namely, one third of water supply on Kosovo and 97% of production of electric energy directly depends on the Gazivode Lake.

Continuation of  “Mini Schengen” project
On 9 October 2019 in Novi Sad, Serbian President Aleksandar Vučić (SNS), North Macedonia Prime Minister Zoran Zaev (SDSM) and Albanian Prime Minister Edi Rama (PS) signed the declaration of intent to establish a “mini Schengen” area among the three countries. The declaration envisages elimination of border control and other barriers in order to facilitate movement in the region. This will enable the citizens to use their national identification card as a travel document, as well as to find employment anywhere in the region if they have a certificate of their qualifications. The declaration also envisages mutual recognition of diplomas, better cooperation in the fight against organized crime and corruption, as well as provision of assistance in case of natural and other disasters, which has proven to be particularly important during the Covid-19 pandemic.With the establishment of the “mini Schengen” area, the Western Balkans region would begin to function in line with the four key freedoms that are the foundation of the EU – freedom of movement of people, capital, goods and services. Bosnia and Herzegovina has finally shown an intention to join the “mini Schengen” area, just like Montenegro, as a result of the change of government in the country. Within the framework of the Washington agreement, Kosovo has undertaken to join the “mini Schengen” initiative. The “Mini Schengen” project is not a compensation or an alternative to membership in the EU for Western Balkan countries, but a path to membership in the EU.

Analysts believe that the recent video-meeting between Vučić, Zaev and Rama had reaffirmed their commitment to the implementation of the “Mini Schengen” project, which after 30 years of disputes, tensions, conflicts and delays is a chance that can lead to prosperity of all countries in the region. According to analysts the recent decision of Serbia and its President Aleksandar Vučić to support the Albanian candidacy for a non-permanent seat on the UN Security Council was prudent and important, as it represent a new positive development in regional relations. However, other countries, i.e. Montenegro, did not make such or similar gestures. Namely, Montenegro has still not withdrawn its disputable decision on exile of the Serbian Ambassador from Montenegro Vladimir Božović, although the decision was contrary to diplomatic conventions.

Affirmation of Roma – Roma Institute
In the past few years Serbia has been paying significant attention to the position and affirmation of minority communities. Numerous programs and project have been established for the Roma community.
The recent opening of the European Roma Institute of Art and Culture (ERIAC) and the Roma Education Fund in Belgrade are a testimony of how much effort Serbia is investing in preserving the Roma language and culture, quality youth education and greater Roma participation in public life, fighting discrimination, and respecting social equality and human rights of Roma. As Serbian President Aleksandar Vučić noted, this will contribute to creation of a better future for all citizens, because a better life for Roma also means a better life for Serbia. Vučić also announced that 100 young Roma will be employed in the public administration. So far, the ERIAC institute for Roma exists only in Serbia and Germany.At the initiative of the Minister for Labor, Employment, Veteran and Social Affairs of the Republic of Serbia, Zoran Đorđević (SNS), in 2019 a working group for proposal of modifications of the social welfare law was established. Namely, the social welfare would be increased by 50% for families with a child achieving very good results in school, if other children have regularly attended or are attending school, and 100% for families with a child achieving excellent results in school. As the social welfare users were predominantly Roma, it is believed that in the long run incentives of the kind, which already exist in some other countries, will be the most efficient way to achieve 100% inclusion efficiency. Namely, children who complete education programs are more likely not to want to live like nomads. The plan was to finalize everything by 2020, but everything got prolonged because of the Covid-19 pandemic.

Analysts believe that it is important that the state of Serbia demonstrates what it can structurally do for Roma. Furthermore, numerous programs and projects that include the Roma population as well are underway.

Serbian President Aleksandar Vučić said “We have to develop an entrepreneurial spirit among the Roma. We must work on this issue in the whole of Serbia, with all citizens, including the Roma, to give a chance to young, talented people.” Vučić also pointed out that the commitment is not only to live and work together but to respect each other and to learn from each other.

Regional approach to vaccination
Vaccination of the population is a key challenge in the response to the Covid-19 pandemic. The issue of vaccination has become an important national security issue, which will have a strong impact and determine the future of specific countries. The most important thing is to save the lives of citizens. The start of production of vaccines in Serbia is of key importance in this context.Serbia assisted other countries as well. In the region, it was the champion of the mission of saving lives. It assisted all countries in the region, and subsequently even begun with the production of vaccines- currently in one factory and in the near future in another one as well.

Analysts believe that Serbia made a right decision when it allowed citizens of other countries in the region to get a free vaccination because in such a way it demonstrated broad solidarity and regional approach to combating the pandemic, particularly as no country can effectively fight the Covid-19 pandemic alone. By making timely and decisive measures Serbia managed to protect its citizens and prevent a health disaster of broad scale. This was also confirmed by key international factors. However, additional efforts still need to be invested to motivate the citizens to get vaccinated.

Aleksandar Vučić’s position is by far the most difficult one
In the current constellation of political relations the President of the Republic of Serbia is in by far the most difficult position. However, in a turbulent environment Vučić proved himself as a factor of peace and stability. Vučić is aware that the dialogue between the official Belgrade and Pristina needs to be finalized so that Serbia could ensure prosperity and a predictable future. In this respect, the most important tasks would include economic recovery, development of the state, affirmation of Serbia in the international realms and stopping the trend of emigration of citizens. Furthermore, there are attempts to undermine Vučić and his government through individuals within the Serb Progressive Party (SNS), who act in collaboration with the foreign factor.Serbia and its President Vučić are under intensive international pressure to recognize independence of Kosovo and harmonize the foreign policy of Serbia with the EU, within which a special emphasis is put on introduction of sanctions against Russia. The concept of foreign policy of Serbia is based on the “EU – US – China – Russia (+ the Nonalignment Movement)” quadrilateral. However, the EU requests from Serbia to follow, that is subject its foreign policy to the EU, although there are no guarantees when or will it become an EU member. Hence, Serbia is requested to subject its policy to the EU foreign policy, and at the same time the EU does not offer anything but only increases the uncertainty-which Serbia and other countries in the region have independently of the EU.

Austrian federal chancellor Sebastian Kurz (ÖVP) assessed that the criticism of Serbia over its cooperation with Russia and China was unjustified. He noted that Serbia had achieved significant progress, which should be “rewarded” also with progress on the European path. “We want all Western Balkan countries to have a European perspective. Particularly in Serbia, developments have been very positive, which must be acknowledged and must also lead to progress on the European path.Anything else would lead to Europe and the EU losing credibility in the region.That would be bad considering that it is a region where many countries of the world have geopolitical interests. Much is at stake.[4] ”

Analysts believe that in the coming period more work will need to be done on strengthening and development of trust between Serbia and the EU, while the EU should demonstrate more sensibility towards Serbia and its position, as well as indicate more clearly its intentions with respect to future membership in the EU.

Progress in negotiations between government and opposition
The negotiations between the government and opposition are taking place on two tracks – with the mediation by the European Parliament and without any mediation. For several months already representatives of the European Parliament have not visited Serbia and are trying to symbolically mediate the negotiations over a video link, which indicates a superficial and unserious approach by the European Parliament. However, the negotiations between the government and the opposition without mediation by the international factor are successfully progressing under the leadership of the Speaker of the Republic of Serbia National Assembly Ivica Dačić (SPS). It is expected that the government and the opposition will broker a final agreement on the organization of the next elections in the spring of 2022. The negotiations among political actors without the presence of international representatives are of major importance, as they contribute to the strengthening of their mutual trust.Analysts believe that the most frequent complaints by the diverse structure of the Serbian opposition are related to their representation in the media. In such a way an impression gets created that the elections are won through the media, which is only partly true. Apart from its boycott of the last parliamentary elections, the opposition has still not prepared a clear and rich-in-program political program or offered quality candidates. In fact, it still predominantly confuses the citizens, because it wages its “opposition battles” mainly through various altercations with the authorities and holders of political positions, in a rather dramatic manner.

According to analysts, it will be necessary to device an inventive solution for the “conflict” of two constitutional concepts, which will be based on further implementation of European values, strict respect of the rule of law and recognition of the achievements and success of Serbian policy in the past few years. /IFIMES