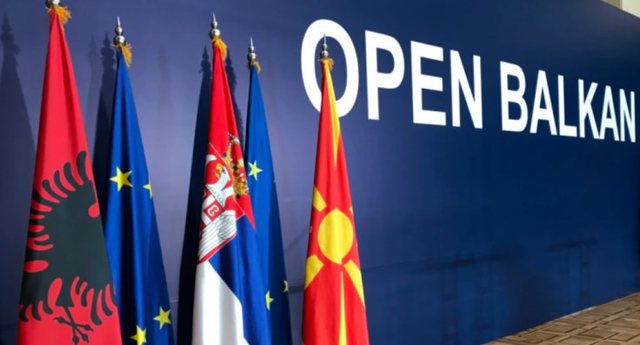 Indeed, there are ten “NOes“; not formal, neither occasional, but with capital letters, clear, well-wishing, consensual and at times diplomatic; they are a tenfold  “NO“ in substance and with a  wide  geo-political geography against “Open Balkans“.

Much is spoken and written on this initiative, which in fact, even  now, 30 months after its  launch is reduced to a“ Balkan Trilateral“. Thanks to many articles and contributions to this topic, everything is as clear as day for those who are willing to hear and see concrete realities related to  “Open Balkans“.

However, following the latest developments, this time we shall recapitulate these  “NOes“ and their authors, major political actors/factors, which in fact disqualify  this initiative, i.e. they practically delete it from the Catalogue of regional projects. Let us go through in more concrete terms:

The first “NO“ continues to be pronounced firmly by official Pristina; almost all say  they are right; because Serbia, continues to ignore the crimes against Kosovo and does not recognize it as an independent state. Although part of the previous EU – led initiatives in the last 20 years, Belgrade has not moved on an inch from its refractory positions; this applies to the dialogue as well, and even worse, it is leaping backwards.

Thus, a legitime question arises: When these and other EU and USA led initiatives have not produced a real outcome, then how can one nurture hopes on the “Semi Open Balkans“ which is clear it serves much more as a “make up“ for Serbia and to stain Kosovo’s image abroad?

The next two “NOes“ belong to Montenegro and Bosnia – Herzegovina, due to lack of faith and scepticism towards the previous serbian policies and practices in the last 20 years, with negative impacts in both these states. True, the new Prime Minister Abazovic has implied quite recently that Montenegro may join “Open Balkans“ ; yet, he himself is hardly convinced about that; moreover that the powerful President Dukanovic with his party is against it; he confirmed his solid  opposition on 15 May in Berlin with his German counterpart and  on 18 May during his visit in Pristina together with his hostess, Kosovo’s President, Mrs. Vjosa Osmani; but, even if Montenegro agrees “by hook and cook“ to join it, one should  not forget that the governmental coalition is extremely fragile to tackle such a burning issue and provisional; therefore, this case there would hang “neither in the sky nor on the ground“ and it will divide more than unite!

The fourth“NO“ maybe found, yes, in the three countries of “Open Balkans“ somewhere among the opposition, to the President of Republic, among media, well-known experts and others. Thus, even the “YES“ there is not articulated with  a full but only with a half voice, it is partial and transitional; as to the “YES“ deriving from the National Consultation in Albania, it may serve only as a worthless political alibi abroad. Because, as it is shown below, it is not  as the question in the form mentions only “some folks that say“ …. but many more against “Open Balkans“ even in Albania .

The fifth “NO“ comes from Ukraine, after the  Russian aggression. Serbia is the only country in the region and EU candidate state that has  not yet imposed sanctions against its ally. Then, what is the sense of opening up Balkans when you shut down yourself to Europe and Ukraine, especially now that it has become the “acid test“ for all!! As to the Serbian YES in two UN Resolutions, not only it did not have any role in the 141 other votes, but it did not bother at all its ally, Russia. In a word, it was just made to “cross the river“! This is why today, the concern is not any more to push Serbia in promoting “Open Balkans“ but to join, right now and without any hesitation the EU and USA in their actions against Russia and in favour of Ukraine.

This was also clearly seen in the Informal Dinner of the 6 regional leaders on 11 May and the Informal Meeting of the Foreign Ministers on 16 May both in Brussels!

The next “NO“ stems from the new realities and particularly fom the lessons being learnt from the Russian aggression and the failure of the school of naive globalism, that allegedly the opening of trade markets and establishment of immense economic areas would solve all political problems, tensions and conflicts, as “Open Balkans“ does also claim. Now, the EU and all other major geo-political actors and factors are putting through the “loophole“ all their initiatives, including the regional ones, in order to requalify and orient them much more towards democracy and politics, as absolute priorities over economy and business.

Accordingly, “Open Balkans“ is disqualified before even  entering the “race“. True, it can help ensure cheaper goods and services today, but due to the unreliable serbian politics one may pay it very dear tomorrow, as it is happening today with gas, energy and food stuffs in Europe.

The seventh“NO“ comes from the EU; it’s a multiple heavy-weight NO“  and in full-fledged unison among the European Council, Commission, and Parliament. The EU Council has expressed this “soft and silent “NO“ in two summits in Sofia on 10 November 2020, in Brdo on 6 October 2021 and in Brussels on 14 December 2021, the Commission in October 2020 and the Parliament in its latest Resolution at the end of April. This “NO“ is implied by ignoring “Open Balkans“, by not mentioning it even  as a term in any official document.

The EU says “NO“ because it was not asked and consulted in advance on this idea; it came as a defiance only a few days after the EU Council said “NO“ to the opening of negotiations for Albania and Northern Macedonia in October 2019; 30 months after it was launched, there is a wide-spread perception thaat, instead of unifying, Open Balkans has divided the countries and folks in the region..

The eighth “NO“ which is closely connected with the EU is its major regional project, with the consent of the 6 region’s leaders – Western Balkans Common Regional Market ( WBCRM) Actually,  this is the term and the project appearing in all the EU official documents and which has the same targets as “Open Balkans“, making the latter totally unnecessary. With the big diffeence that WBCRM is all-inclusive and enjoys the EU political and financial support. It has even approved a funding of 30 Billion Euro for its gigandic Investment Plan for the region for the period 2021 – 2027; it is also eartargeted for the implementation of the WBCRM and other projects there; in particular,CEFTA, The Regional Cooperation Council and the Regional Energy Community together with the Berlin Process. Therefore, the EU cannot “open its purse“ for a semi initiative, whom it does not recognize and with problematic Serbia as initiator. Otherwise, as the albanian folk saying would apply: “the sheep and goat belong to Zerre but the fame goes to  Hasan Qerre“

This European “NO“ was also acknowledged and stated last week by Serbia’s Prime Minister, Brnabic, who attended an event on the EU future on 6-7 May in Florence, Italy. In her opinion, Europe does not  want “Open Balkans“, since it divides instead of uniting, and this was also mentioned by Mr. Borrell and Lajçak.

The ninth serious “NO“ comes from Germany; it was first disclosed last September by Chancellor Merkel in Tirana; but it was Chancellor Scholz who disclosed it  in a diplomatic way this April in his Joint Press Conference with PM Rama in Berlin; he did not mention it at all as a term, despite the persistence of  attending journalists. Well, this “NO“ is fully undersandable, since Germany launched  the “Berlin Process in 2014. The claim that “Open Balkans“ is its unit or extension or because the Berlin Pricess presumably has failed has not persuaded anone in official Berlin and in other major campitals thaat are active in this process. Chancellor Scholz, while leaving aside “Open Balkans“ stated it clearly that he in person is going to  invigorate the Berlin Process ( Beleben). He maintained the same attitude on the 4th of May in his encounter with Kosovo’s PM, Albin Kurti. But, when Berlin says “NO“ then, Paris, Rome, London, the Hague and others find it extremely hard to say “YES“.

The problem is that this “NO“ cannot be reversed,  as the partisans of “Open Balkans“  believe  naively. Each demarche to add at least the name “Open Balkans“  in the official documents of the EU and other international organizations would fail; for the abovee-mentioned reasons and because there is no consensus on “Open Balkans“ within the EU; in that case, its opponents or sceptics may ask with concern what happened that we need to make such an amendment or addition, moreover when WBCRM is there and it complies with all our requirements? Why do we need other paralel initiatives in the region or just fo regional protagonism?

Last but  not the least, the USA have also repeatedly said in silence “NO“; the latest occasion was by the end of April, when PM Rama declared in public that the US Assistant Secretary of State, Mrs. Donfried in her visit in Tirana had expressed her “vigorous support for Open Balkans“.  However, the Press Briefing of the US State Department on the same day did not make any mention of “Open Balkans“. Neither was it mentioned in the encounter between PM Rama and Secretary of State Blinken on 15 February in Washington, although the former claimed he had received a “YES“. Likewise, Mike Pompeo, former US Secretary of State, who visited Tirana on 15/16 May did not say any  word, even privately, although he sponsored the political deal on 4 September 2020 between Belgrade and Pristina, where Mini -Schengen was at least included.

Finally, this is perhaps the last article by the author on this particular issue, whereby apart from understanding, there have been also expressed resrvations and objections. But  not as opponent or critic of the government(s), whom  I have served for a long time as a diplomat in Brussels, Berlin and elsewhere, but as an expert on this area and as a well-wisher. From this position, I would like to reiterate the suggestion made in the previous article “Open Balkans sticks neither in Brussels, nor in Berlin“ that while it is not too late, our side may propose in a diplomatic  way to merge it with the EU – led WBCRM. In this way, this unsuccessful story would come to an end; you will see how these 10 “NOes“ will immediately turn into the much expected and genuine YES!

*Dr Jorgji Kote is a career diplomat holding the highest diplomatic rank of Minister Counselor and a member of General Assamble of Council of Albanian Ambasador based in Tirana Albania.

He is  a well-known publicist; among others, in the last 15 years, he has published 10 books in Albanian and in English on diplomacy and international relations, with a wide-reaching echo, both at home and abroad.

He has also contributed to the largest Albanian Daily Newspapers and on online media ARGUMENTUM with  over 400 articles on these issues,