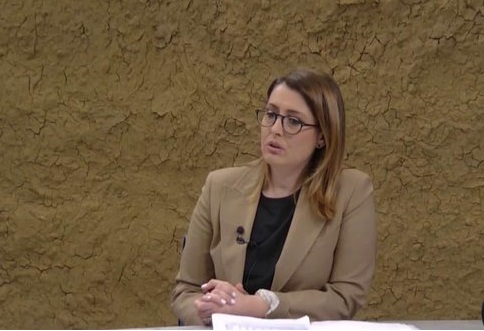 Albania has the vaccination networks even for a massive campaign but they will be operational as soon as soon supplies of vaccines are secured.
This optimistic news was broken out by Health Minister Ogerta Manastirliu during a TV talk show as she was asked when journalists would be vaccinated as they are considered to belong to the group working in critical services.
“Obviously everyone is part and we have in mind all those who are employees in critical services who according to a strategy and a plan which is very detailed and will definitely be even more intense in relation to the distribution with the arrival of vaccine, because everything depends on the amount of vaccine that comes,” was the vague promise of the minister for journalists’ vaccination on Monday evening.
“The important thing is that we have the capacity to carry out the vaccination, and even the massive vaccination. We will use every health center after the arrival of vaccines. It will continue in stadiums and hospitals, and in health centers at the moment we will have high amounts of the vaccine and when mass vaccination of the population starts,” she said.
“The 14-month target is very ambitious in the conditions we are in for the fact that, as you can see, every day the fight to secure vaccine doses is very strong on all sides and the quantities in relation to the requirements remain very small. However we do not fall into the group of those who surrender, on the contrary. I am very confident that sooner or later we will have very good news. But so far, this is the situation.”
This was the gist of a long talk with journalists at Rinas airport of PM who again personally got a small parcel of Pfizer vaccines. To be precise about 8,190 jabs Pfizer company.
Albania has received a total of about 17,000 dosages which as specialists estimate go for the vaccination of some 5,500 persons.
The perspective to put at work the vaccination networks promised by Manastirliu seem dim as Rama’s plans for the future supplies were so confusing that no one can say for sure when this or that set amount of vaccines will arrive and on top of all no graphic is made available.
This happens because as PM said 70% of the total vaccine production is in the hands of only 10 states. All other countries including Albania that have had access to possible doses have shared among themselves only 30% of the total volume.
But there are worse than Albania and below is Rama’s confirmation: “Today the figure of 140 countries remains unchanged, including the countries of the region, which still do not have any available dose.”
To be short the play with words by the PM and his health minister and other officials who recite what instructed by their chief leaves no room for hope to have the vaccination networks for the imaginary massive campaign in 24-hour operation soon when the emergency is so high that health officials cannot admitt. The need for vaccines is NOW and for all the people rather than for the elite picked up by Rama who has taken even the power who will live and who will pass away…
However the frightening hike of the daily losses of lives, even of young people, speak for themselves and nothing can hide the ongoing tragedy, which unfortunately will pass all limits in the history of this country. But one thing will remain to be written black on white when hopefully the pandemic will be over: how much unscrupulous and mercilessly has been the management of this plague by this governance in the third decade of 2021!
/argumentum.al