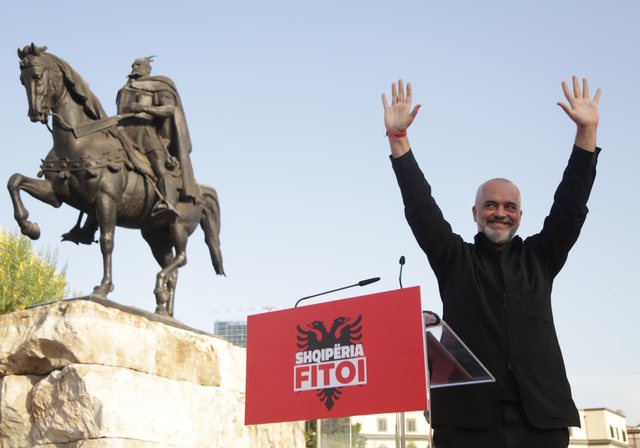 The April 25th parliamentary elections held in the poorest country of Southeast Europe, showed once again how fragile democratic institutions can become when free and fair elections are impossible to hold. Albania’s Socialist Party under the leadership of Edi Rama has installed a one-party state regime that is taking the country in the wrong direction.
Boosting Rama’s internal power politics has been the primary goal of some European circles to the detriment of building democratic institutions and transparency. While all of this is taking place, Albanians are facing an uncertain future and high levels of poverty. The April 25th parliamentary elections have turned Albania into an Eastern autocratic regime ruled by a politician who works against the democratic principles upon which the European Union was founded.
According to a statement on the recent parliamentary elections issued by Elisabeth Rosenstock-Siller, the OSCE’s Acting Deputy Chief of Mission: “In Albania’s parliamentary elections, the United States notes the OSCE observation mission’s finding that the ruling party derived significant advantage from its incumbency, including through its control of local administrations and from the misuse of administrative resources. We also note their finding that widespread practices of vote-buying remained a problem, and we reinforce concerns over the leaking of sensitive personal data, including political preferences of voters.”
Two weeks after the election, Albania’s judiciary has not held Edi Rama’s party to account for electoral irregularities.
Albania’s so-called legal reforms, praised by Western diplomats, have generated a still dysfunctional rule of law, elections law that does not meet EU standards, press restrictions, and increasing corruption across the government.
According to democracy advocate Martin Henze: “In this context, we should remember that it was Prime Minister Rama who violated the agreement of 5 June 2020 on the electoral law, which was reached with the support of the US and the EU representative here. The 2021 parliamentary election took place because of this in house law of the Rama administration, this is also not in line with Europe.”
These actions are further enhanced by tarnished electoral malpractices and vote-buying that took place a few weeks before the parliamentary elections.
Today, Albania has become an autocracy without respect for the rule of law, with overwhelming subjugation of independence of institutions, and total absence of balance of powers. Tirana has a government-controlled media that gives total lip service to Rama, a man who has transformed his country into Europe’s largest producer of narcotics controlled by regional organized crime. The Albanian state is totally captured by Edi Rama and Western countries are failing to understand that an autocratic regime in the heart of Europe is a source of turmoil and seriously undermines democratic institutions in the Balkans and beyond.
International actors have failed to grasp that autocracy has taken firm root in Tirana despite the efforts of President Ilir Meta, who is the only guarantor of independence and a genuine head of state who is fighting to contain Rama’s thirst for power grab and dominance.
Albania’s real economic and production capacity as well as its fragile EU integration mechanism are struggling due to the country’s autocratic regime installed by Edi Rama; such a prevalence of eroding democratic institutions and behavior of a single-party state are a major setback for the entire Balkan’s region. /International Policy Digest