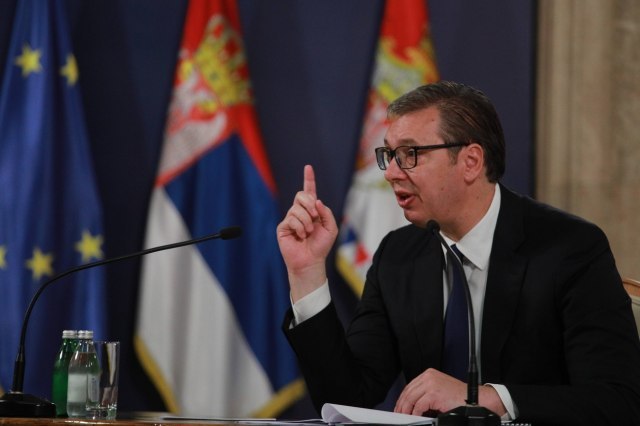 TIRANA, July 29 – In the latest arrogant behavior towards Kosovo, President of Serbia Aleksandar Vucic has said there will be no dialogue with Kosovo as long as Prime Minister Albin Kurti remains in power in Pristina.

“I am worried about Kurti’s irresponsible behavior, we will do our best to preserve peace and stability, but I am asking a few countries to help us with that, to help us reason with Kurti,” Vucic said in an interview with Euronews Serbia on Friday.  Regarding dialogue in Brussels between the representatives of Serbia and Pristina, Vucic said that there will be no action from him as long as this situation lasts. He added that he will be present for talks, but “I don’t know what to talk about with him”.

Earlier Kurti told Voice of America that he is always willing to travel to Brussels in order to meet with Vucic and is hoping to do so by the end of August. “We have never denied the importance of these talks, but we have said that they should be principled talks in which Kosovo is a party to the talks, and not a topic of conversation as it has been in the past,” Kosovo PM said, adding that the goal of any legally binding agreement should focus on mutual recognition.

Until now, Kurti and Vucic have met only twice, but without making any concrete progress in the dialogue for the normalization of relations. The Special Representative of the European Union in the Pristina-Belgrade dialogue, Miroslav Lajcak said earlier that a “new situation” has been created in Kosovo-Serbia relations that has changed the “plans and topics” of his visit to Kosovo and Serbia.