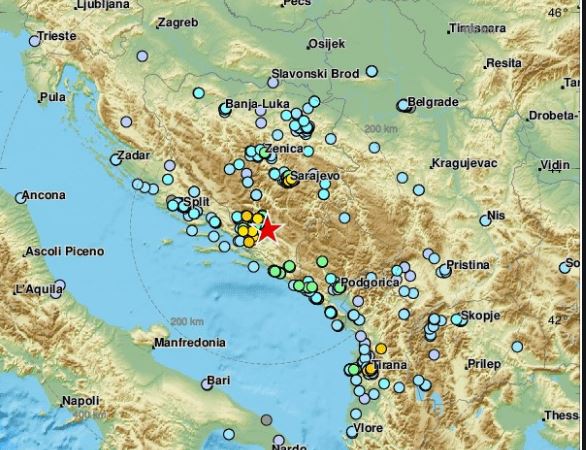 A strong earthquake struck Bosnia late Friday killing one person, injuring at least two others and sending hundreds of people fleeing from their homes.

The magnitude 5.6 earthquake hit 42 kilometres southeast of the city of Mostar at 11:07 pm CET close to the southern town of Stolac, the European Mediterranean Seismological Center said. The quake was at a depth of 5 kilometres, EMSC said.

A 27-year-old woman died from injuries and her parents were injured after a rock dislodged by the earthquake slammed into their family home in Stolac, authorities said.

Other towns in the southern part of Bosnia such as Ljubinje and Čapljina reported significant material damage. The number of casualties was not immediately known, with rescue teams set to conduct surveys of nearby villages on Saturday.

Members of the country’s three-way Presidency immediately reacted, with Bosniak representative Šefik Džaferović expressing his condolences to the family of the killed woman, calling her death a “great tragedy”.

Bosnian Croat member of the Presidency Željko Komšić visited the victim’s parents, who are receiving treatment at a Mostar hospital, pledging to visit Stolac later on Saturday.

Their Bosnian Serb counterpart Milorad Dodik issued 500,000 convertible marks (€250,000) in emergency funds to Ljubinje to help with the damages.

Further minor earthquakes were registered in the general area of Stolac throughout the night, ranging from 2,7 to 4,4 in magnitude, local outlets reported.

The main earthquake was felt across Bosnia, but also along the coast of neighbouring Croatia, Montenegro, and further southeast in Albania.