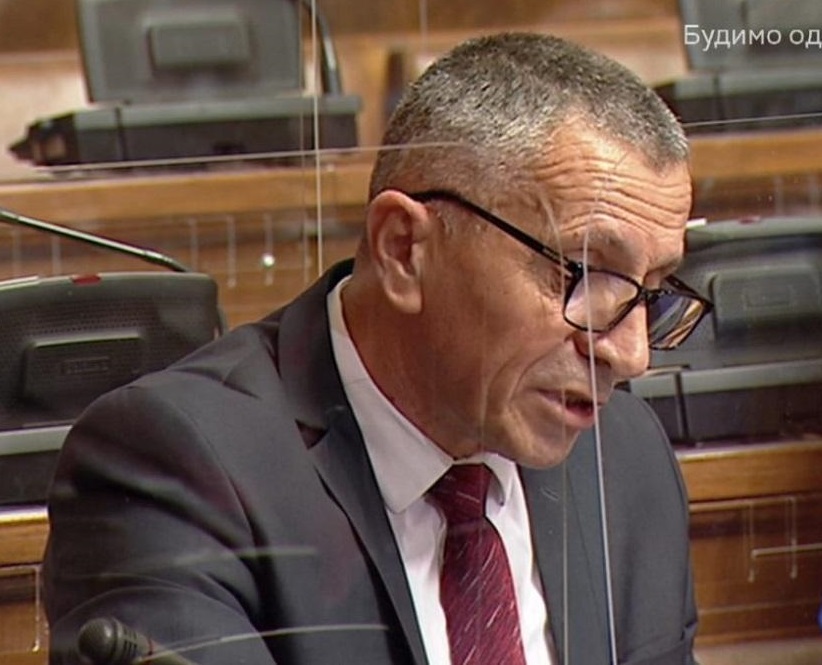 Parliament in Belgrade has turned into a stormy scene where the Albanian Deputy, Shaip Kamberi representing Albanians of Presevo Valley held a speech in Albanian for the first time in parliamentary deliberations of the Serb legislative body challenging Speaker Ivica Dacic, who tried insistently to stop him on Monday.
Kamberi continued to speak in Albanian, condemning the latest decision of the Supreme Court in Belgrade that refused to find Minister Aleksandar Vulin guilty of discrimination, insults and hate speech against Albanians.
The Supreme Court in Belgrade has ruled in favor of the Serbian Minister of Internal Affairs, Aleksandar Vulin, who openly used a pejorative term “Shiptari” towards Albanians.
“The Court has already given judicial force to the institutionalization of hate speech, intolerance and xenophobia against Albanians in general, and those in Serbia in particular,” said Kamberi in his speech.
He called on the European Union, United States of America and regional countries to react against Belgrade and stop the institutionalization of the hate speech towards minorities in Serbia.
“Today ‘s decision of the Supreme Court in Belgrade is a very dangerous precedent for minorities in Serbia, but also in the whole Western Balkans,” Kamberi said.
“Mrs. Merkel, Mr. Macron, Mr. Borrel, Mr. Lajcak, Mrs. Vonder Leyen, is this your pro-European Serbia? This did not happen even during the regime of Slobodan Milosevic who killed, raped and expelled Albanians calling them albanac,” said Kamberi.
Rejecting Dacic’s arrogance to prevent him from continuing his speech in Albanian Kamberi told him that he wouldn’t submit to them. “It’s in vain!” he pledged from the rostrum of Serbian Parliament.
“Even after yesterday’s court ruling, I am even more convinced that your Serbia full of hatred will not win. The Balkans have no other alternative to peace, coexistence and mutual respect,” said Kamberi who warned that their downfall had no alternative.
“In this case, my question to Prime Minister Brnabic is whether this language of hatred will be installed as a standard in your government in communicating with minorities and especially with Albanians?” MP Kamberi concluded his speech in Albanian. /argumentum.al