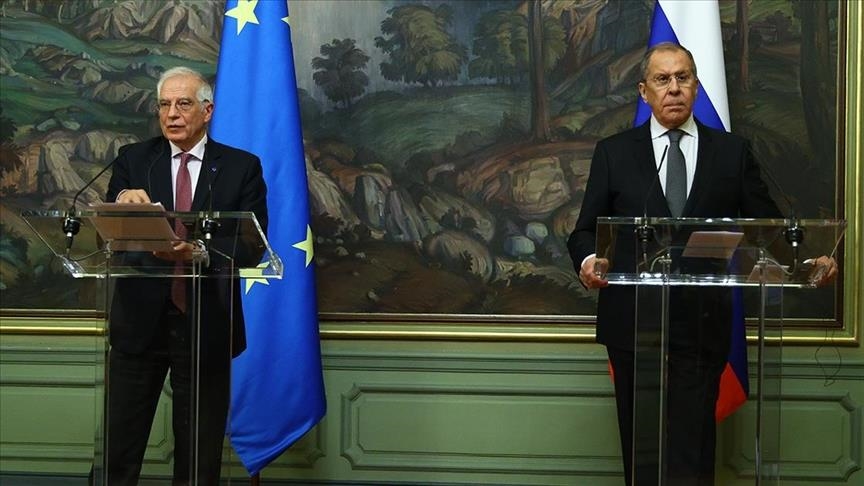 EU foreign ministers on February 22 agreed to fresh sanctions against “specific persons” over Russia’s jailing of opposition politician Aleksei Navalny and a crackdown on his allies, according to German Foreign Minister Heiko Maas.

The Russian Foreign Ministry responded by saying it was “disappointed” at the bloc’s move and accusing the EU Foreign Affairs Council of invoking a “far-fetched pretext” to prepare “new unlawful restrictions on Russian citizens.”

Moscow also rejected as “categorically unacceptable” outside demands for the release of a Russian national convicted by a Russian court, as Navalny has been in processes that he and Western governments have said are politically motivated.

Top diplomats from the EU’s 27 members gathered in Brussels were weighing targeted measures against Russian individuals and institutions, such as asset freezes and visa bans, under the bloc’s newly created sanctions instrument to punish human rights violators.

“The relations are certainly at a low, there is no other word for it,” Maas said in Berlin after returning from the meeting with his counterparts in Brussels. “Therefore, we decided today to impose further sanctions and list specific persons.”

“We consider it categorically unacceptable the constantly expressed unlawful and absurd demands for the ‘release’ of a citizen of the Russian Federation who was convicted of economic crimes by a Russian court on the territory of our country in accordance with Russian law,” the Russian Foreign Ministry said.

The move to further sanction Russia comes nearly two weeks after the controversial visit by Borrell that coincided with the expulsion of three EU diplomats from Russia.

Borrell noted on February 21 that Russia continues to ignore a ruling from the European Court of Human Rights (ECHR) demanding Navalny be set free.

EU member states, led by Poland and the Baltic countries, are calling for a hard line against Russia, including additional economic sanctions.

On the eve of the meeting in Brussels, two of Navalny’s closest allies met in the Belgian capital with eight EU foreign ministers and several EU ambassadors.

One of the allies, Leonid Volkov, told AFP they “talked about targeted personal sanctions against Putin’s closest allies and people who are guilty of major human rights violations.”

A group of EU members, including influential France and Germany, were calling for a more targeted approach and ruling out economic sanctions.

Unanimity among all the bloc’s members is normally required to impose sanctions.

The United States, EU, Britain, and Canada have already hit Russia with a number of sanctions over the 2014 annexation of Crimea and Moscow’s support for separatists in eastern Ukraine.

It is disappointing that the EU Foreign Affairs Council adopted it on February 22 this year. under a far-fetched pretext, the decision to prepare new unlawful unilateral restrictions on Russian citizens. Another opportunity has been missed for the European Union to rethink the course of artificial linkages, sanctions  and pressure in relations with Russia, which has shown complete failure over the past years. Instead, obeying bloc discipline and anti-Russian stereotypes, Brussels is instinctively pushing again on the inoperative sanctions “button”. Moreover, contrary to logic, a political decision is first made, and then it is planned to arbitrarily select candidates for it.

Another erroneous step was taken by the EU Council in the face of an unprecedented warming up of the anti-Russian information background in the European Union the day before. The reason was the talks of the EU High Representative for Foreign Affairs and Security Policy J. Borrell on February 5 this year. in Moscow, in chorus declared in the Western media as “ineffectual” and “humiliating”, followed by a wave of calls for increasing sanctions pressure against our country. The meaning of this information campaign was clearly to find an appropriate reason to instill in the EU foreign ministers the idea of ​​the need to “take revenge” and, by further deteriorating relations with Russia, compensate for the image costs allegedly incurred by EU diplomacy.

The above once again confirms that the guiding star in the actions of opponents of improving relations with Russia remains the political situation, and by no means with pathos their declared commitment to protecting human rights and fundamental freedoms. It is characteristic that the “Global Human Rights Sanctions Regime” established by the EU Council in December 2020, like the two previous EU sanctions mechanisms – for cyber attacks and chemical incidents – will be used primarily against our compatriots. Brussels’ attempts to position these illegitimate instruments as having a certain “horizontal” and “global” character can easily show their anti-Russian essence as a means of implementing the policy of “containment” of our country.

We consider categorically unacceptable the constantly sounding unlawful and absurd demands for the “release” of a citizen of the Russian Federation who was convicted of economic crimes by a Russian court on the territory of our country in accordance with Russian law.

In international practice, this is called interference  in the internal affairs of a sovereign state. However, the European Union , obviously, does not want to follow the ethics of interstate relations, but, exploiting the myth of its own infallibility in the field of human rights, which is daily refuted by pictures of police brutality on the streets of many European cities, the continuing attack on freedom of the media and the sphere of using the Russian language, they promote their the concept of a “rules-based world order”.

It is only regrettable that such illegitimate instruments – ultimatums, pressure and sanctions – are rooted in the EU’s foreign policy arsenal . While claiming the role of an independent pole in the global proscenium, the EU seems to have completely forgotten that this can be realized only on the basis of respectful attitude towards partners, the principle of non-interference in internal affairs and strict adherence to international law.