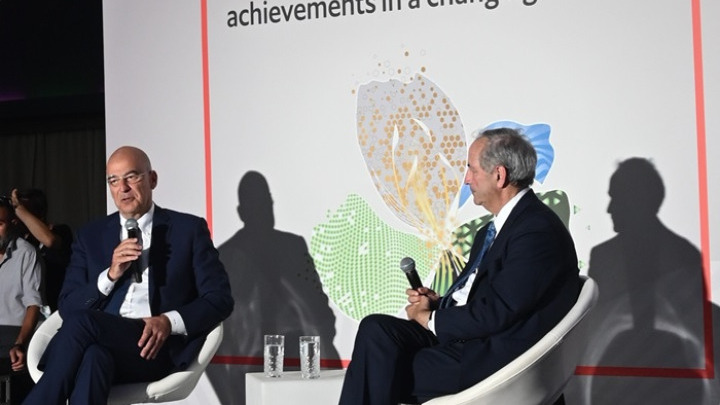 There is “no reason whatsoever for which Greece and Turkey cannot become the best of friends,” said Foreign Affairs Minister Nikos Dendias in his interview to The Economist on the sidelines of the 26th Annual Economist Government Roundtable that is being held in Athens on July 5-7.

The truth is that for Greece “good relations with Turkey are very important,” Dendias said. “But good relations with Turkey have to have a very solid basis, as with all other countries of the world. And what is that solid basis? It is obvious. It is International Law, it is International Law of the Sea, it is human rights, it is rights of women, it is respect for each other and it is tolerance.”

And Greece has always hoped, he noted, “or at least for the last three decades, that Turkey would come closer to that set of ideas, would come closer to the European Union, let me remind to everybody that Turkey still aspires, or at least pays lip service to the aspiration of becoming a member of the European Union, and that Greece is the only country that supports Turkey towards that aspiration. Still supports Turkey.”

Referring to the recent NATO summit in Madrid, Dendias said that it was “a positive turn, a green card for Sweden and Finland.”

But also, he noted, “I am expecting Sweden and Finland to change a little the climate within NATO when they become members, because they are both proud democracies, important democracies, and it is important to underline that NATO is an Alliance of democracies.”

Dendias continued to observe that “of course there are problems in Europe, and there are problems that the new generation of leaders, like French President Macron, like German Chancellor Olaf Scholz, have to deal with. But, yet again, the important thing is for Europe to stay on course.”

But these should be addressed also “with one other dimension that we should always remember: to keep the Euro-Atlantic bond alive. It is important that in this process the USA stay with us,” Dendias concluded./ANA-PMA