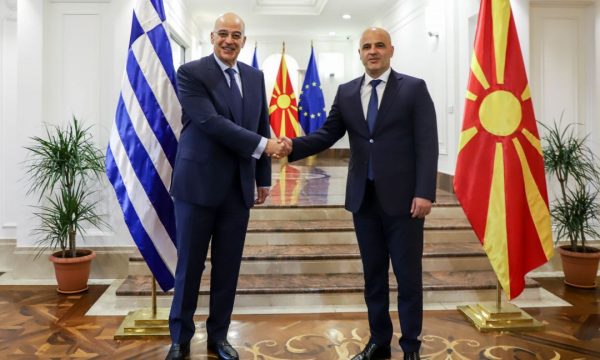 Dendias spoke of Greece as a country that “desires and works feverishly for the consolidation of peace, security and stability in the region,” and that “the only way to achieve these goals is to clearly and fully support the European prospects of the Western Balkans.”
He noted that “we are absolutely convinced that the accession negotiations between the European Union and Albania and North Macedonia must begin immediately,” he was quoted by Greek City Times on Friday.
Dendias also said that he is very pleased with the fact that “Greek investments in North Macedonia are in a prominent position, we are the third or fourth largest foreign investor.”

The Greek minister also revealed that a Greek company has expressed interest to “invest more than 200 million euros in the construction of an important power plant in Skopje, a project that will have multiple beneficial results.”
Dendias also met with North Macedonia’s Prime Minister Dimitar Kovachevski.
On Twitter, Dendias wrote that he held “fruitful talks on the prospects for deepening Greece-Macedonia cooperation, especially in the economic and energy sectors, implementation of Prespa Agreement, North Macedonia’s EU accession path and on regional and international developments.”

On the issue of foreign policy, Dendias, according to ekathimerini com, expressed Athens’ satisfaction that “North Macedonia has fully aligned itself with the decisions of its future family, the European Union, particularly those condemning revisionist actions in the Eastern Mediterranean and, more recently, the violation of International Law and the United Nations Security Council Resolutions in the fenced-off area of Varosha.”
/argumentum.al