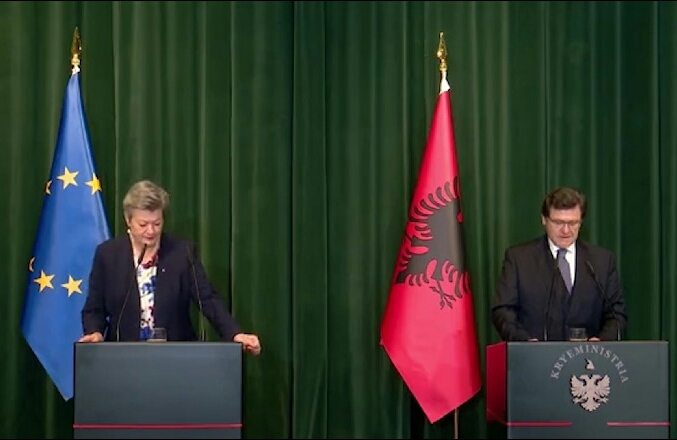 “Albania is approaching elections and all parties must take responsibility for the integrity of the candidates on the April 25 parliamentary elections,” has said the EU Home Affairs Commissioner, Ylva Johansson in a joint press conference with Albanian chief negotiator with the Union, Zef Mazi.
As it happens rarely Mazi was delegated by PM Edi Rama to unveil what he discussed with the Commissioner during the meeting held on Saturday in the frame of Johansson’s visit to Tirana.
In an optimistic note the Albanian negotiator declared Albania is on the verge of EU membership.
“The Prime Minister and the Commissioner agreed that the close cooperation between Albania and the EU is based not only on the common values ​​they share, but on our mutual interest for more security for our citizens. The Prime Minister noted the long list of achievements in important aspects as police cooperation with EU law enforcement agencies, cross-border control issues and immigration issues,” Mazi said.
In the meantime the EU Commissioner spoke of progress of Albania but hastened to say: “Certainly there’s much to be done.”
It can be said without any reservations that this is a cliche used by all representatives of Brussels in meetings with Albanian officials or this is served to the public opinion which for the sake of truth has got exhausted of this routine scheme as on top of all the tragic impact of the pandemic is creating severe scarves among the hopeless population.
But what can make Albanians happy is that according to the Commissioner Albania and the EU have a cooperation with all agencies in the field of justice and home affairs and “It (Albania) is a model that we want to repeat in all Western Balkan countries.”
The Commissioner also had a separate meeting with President Ilir Meta who according to what he revealed in a post on FB told Ms. Johansson that after the April 25 elections organized crime will take a sharp blow and Albania will return to the legal and full respect for human rights. Differently from quotations by Mazi of PM the President described the conversation with the EU Commissioner as open and fruitful on the urgent challenges of Albania’s European path.
“After the elections of April 25, 2021, organized crime will receive a decisive blow and Albania will return to the tracks of the rule of law and full respect for human rights,” said President Meta.
A quick perusal of what was released by government official sources it catches the eye the quotation of the senior Commissioner that Albania is a model that EU wants to repeat in all Western Balkan countries.
But given the fact that other WB countries like Serbia or Montenegro are strides forward in the accession process with the Union the question rises: Can Albania really be a model for them on such thorny issues with which the Commissioner is tasked to carry out?
This can naturally lead to the one million question: Why aren’t in unison the EU members to open the first intergovernmental session of the club with Albania leaving pending a precise date of the talks after the unexpected failure to have them started during the German EU Presidency last year?
However it might be more possible that a full answer on this will be given after the parliamentary elections on 25 prillit 2021.
/argumentum.al