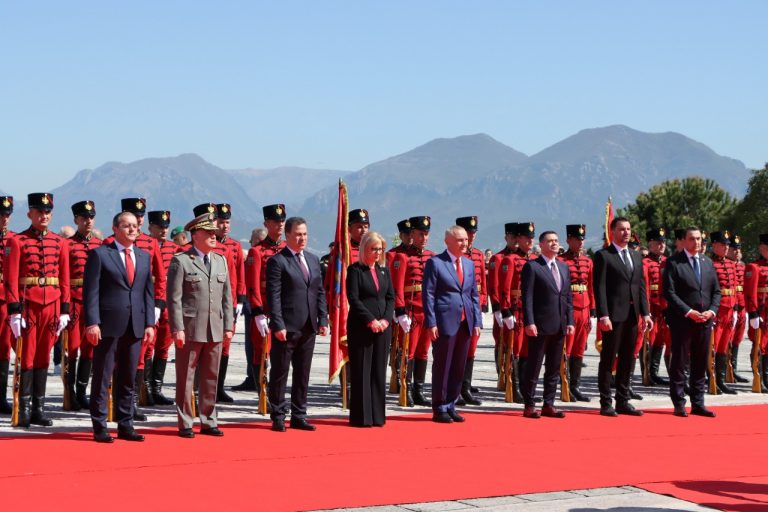 The highest leaders of the Albanian state and government paid homage to the “Martyrs’ Cemetery” on the occasion of May 5, the Day of the Martyrs and released statements on the occasion on Thursday.

Present at the homage were President Ilir Meta, Deputy Prime Minister Arben Ahmetaj, Speaker Lindita Nikolla and other state and government leaders. It was also present Tirana Mayor Erion Veliaj. They laid wreaths at the “Mother Albania” monument in honor of the memory of the fallen for the freedom of the country.

“Today is a great day to get inspired in building a better future for Albania, and to always remain vigilant in the defense of sovereignty, freedom, and independence,” said President Meta speaking to the media.

Prime Minister Rama expressed his humble respect to the Martyrs on this occasion through a post on social media.

“I feel humbled with respect for those who loved the fatherland laying down their lives. Our Martyrs, the unforgettable,” Rama wrote.

May 5 is the Day of the Fatherland Martyrs who gave their lives for freedom, democracy, human rights and the dignity of every Albanian.

Martyrs’ Day originated on May 5, 1942, when Qemal Stafa was killed, who with his activity became a symbol of the Anti-Fascist National Liberation War. In honor of the memory of the fallen for the freedom of the country, every year in the Martyrs’ Cemetery homage is paid by the highest leaders of the Albanian state.

Even the Anti-Fascist National Liberation War is still viewed differently by the left and right- wing forces. Due to this opposition boycotted the ceremony as usual. /Argumentum.al