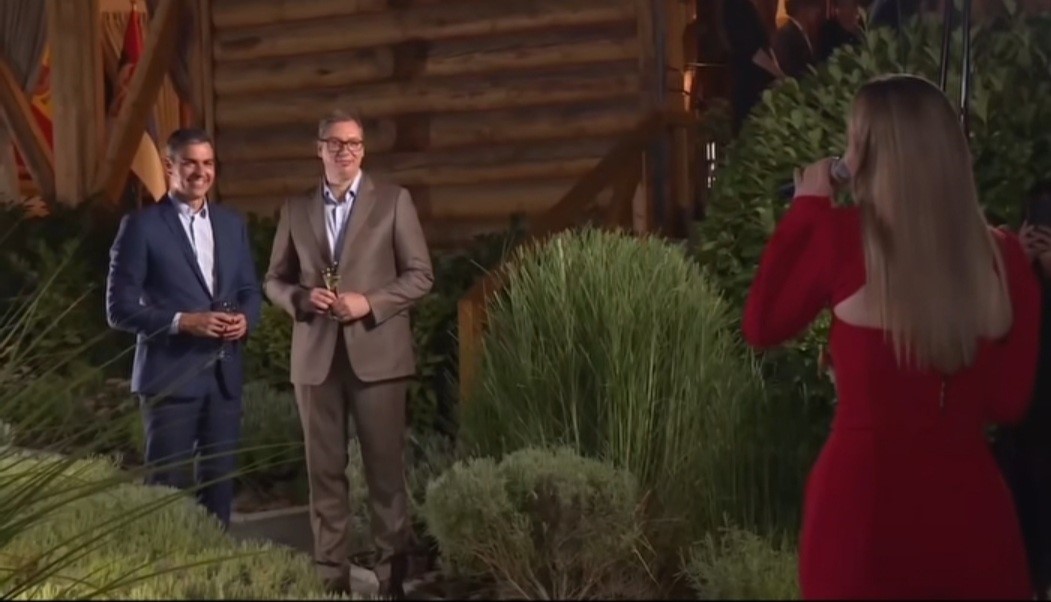 Music is the Serbian diplomatic “entice” to the heads of various states visiting Belgrade. Precisely at important dinners where political and economic interests are interwoven, Serbia brings out its “ace under its sleeve” to soften the hearts of even those leaders with seemingly grave appearances but who “mellow” in front of the fiery Balkan spirit.

Music, this spiritual food that intoxicates the heart and mind, is the golden diplomatic ace that Serbia throws from time to time on the table of geostrategic interests. One could call it a typical hospitality of Balkan people, who stand out for their generosity, traditions and folklore wealth, an important part of which, of course, is Serbia, too.

However, what Serbia reveals from time to time has less to do with traditions than with its political-economic interests.

In this particular case, the visit of the Spanish Prime Minister, Pedro Sanchez to Belgrade as part of his first tour in the Western Balkans, has reawakened the Serbian tradition of singing exclusively for special guests.

After the official meeting with Vucic, the Spanish Prime Minister, Pedro Sanchez, stated in a joint press conference with the Serbian president that when it comes to the issue of Kosovo, Spain is on Serbia’s side.

“Spain supports Serbia when it comes to the issue of Kosovo and will always be with it in the defense of the principles of international law and territorial integrity and sovereignty,” said Sanchez.

The Spanish government offers continuous and ongoing support for Serbia’s European path, as well as for the territorial integrity of our country and Belgrade is grateful for this, said President Aleksandar Vucic, who hosted the Spanish Prime Minister for dinner on Thursday night.

Well, there could not be a more beautiful gift for Vucic than this statement by the leader of a European country that still does not recognize Kosovo, so the host Vucic surprised the Spanish leader with a Spanish song

Vucic posted on his Instagram profile a photo from the dinner organized in honor of the Spanish Prime Minister, where the singer Jelena Tomasevic performed the song “Oro” in Spanish.

“We have prepared a surprise for a dear friend. Our Jelena Tomasevic sang the song ‘Oro’ in Spanish, which set a special tone for this evening,” wrote Vucic and thanked her for the wonderful performance.

Over the years, the delegations of important countries are entertained by special singers, who have a rich colorful repertoire, in dinners hosted by the Serbian side.

This is not done by a professional singer as in the case of the reception of the Spanish Prime Minister, but by a special “singer” with important political weight as was the case of the former Serbian Minister of Foreign Affairs, Ivica Dacic

Ivica Dacic, as the Serbian chief diplomat, has sung at some of the official dinners hosted in Belgrade.

And not Serbian songs or other famous songs, but Dacic knows how to “shoot” right into the heart, as he approached the table where the Turkish President Recep Tayyip Erdogan was surprising him by singing the Turkish song “Osman Aga”, a song sung in many Balkan countries.

In addition it is to be remembered the echo that the Greek media gave to the news about the dinner hosted for their Foreign Minister, Nikos Kotzias during his visit to Serbia, where Ivica Dacic surprised everyone with a song in Greek.

“During a lunch held in honor of the Greek counterpart, Nikos Kotzias, Ivica Dacic suddenly took the microphone and under the sounds of the orchestra began to sing fluently in Greek the well-known song “Don’t get angry my eye” of the well-known Greek singer Jorgo Dalaras,” wrote the Greek media.

According to them, in the moment that Dacic started to sing, the Greek minister Nikos Kotzias also stood up and together with Ivica Dacic sang the song in the presence of other guests.

And at the end of the song, he has not forgotten the old Greek tradition, breaking a plate.

There is no stopping for Ivica Dacic, who, already aware of his talent as the “nightingale of diplomacy” of Serbia, could not help but sing to Russian President Vladimir Putin.

Thus, the Serbian minister sang the famous “Kalinka”, the traditional song sung by the “Red Army”, at the official dinner held in honor of the president of Russia, Vladimir Putin during one of his official visits to Belgrade,.

Dacic also welcomed Albania’s Prime Minister Edi Rama with a song when the head of Serbian diplomacy sang “O sole mio” for him in 2014. Although he did not allow himself to sing in Albanian, he fulfilled Mr. Rama’s request with an Italian song.

It is not for nothing that this colorful repertoire of Ivica Dacic is the cherry on the cake of Serbian diplomacy.

All this Serbian hospitality for the various government delegations translates into money, investments and geostrategic interests.

As in the last case, when Serbian President Vucic by the side of the Spanish Prime Minister emphasized that “Serbia considers Spain as one of the greatest friends in the world.”

He revealed important figures for the Serbian economy saying that recently the trade exchange had increased significantly, which was 811 million euros last year, while it has increased by 64.1 percent in the first five months of this year.

“Spanish companies have shown interest in doing business in Serbia and we will open our doors wide for them,” he said.

Vucic emphasized that the first pioneering cooperation in the field of military industry has been established between Serbia and Spain, recalling that Serbia has purchased two Kaza C295 transport aircraft and that it will continue to purchase equipment from Spain.

“We will open and complete the drafting of all general agreements, and all those important ones for infrastructure works and energy investments, so that they achieve the best possible results,” he said.

All these cooperation agreements show why Vucic chose a professional singer to impress his important friend this time.

And actually yes…! Pedro Sanchez seemed in awe of the Serbian singer singing so beautifully in his Spanish language

This is the key… Serbs know how to speak the language of the “guests”.