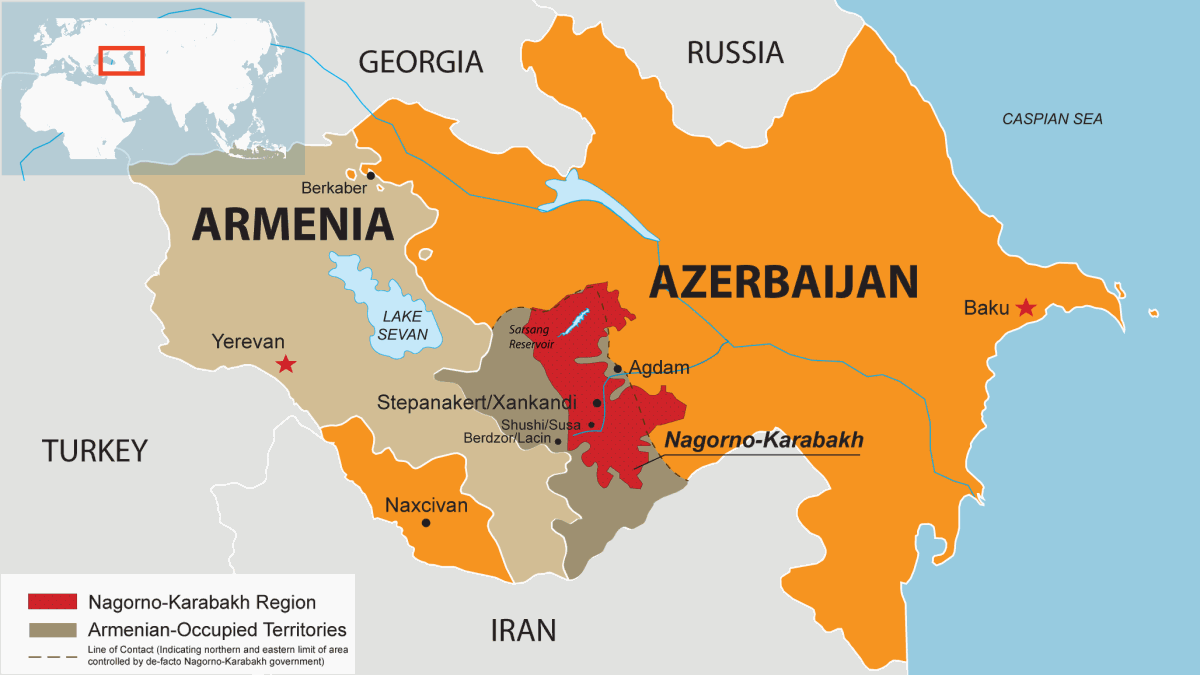 Time and time again, all sides have stated that Kosovo was a one-time thing and not a formal legal precedent. Invoking it in the case of Nagorno-Karabakh demonstrates an unwillingness to recognize this reality.

By Ayaz Rzayev
When major Western powers supported Kosovo’s independence bid, they unequivocally warned that Kosovo was sui generis—a one-time deal, a special case under international law that cannot be used under any circumstances as a precedent for other situations. However, in retrospect, it did not stop separatists from appealing to the Kosovo case whenever it seemed opportune to them. As British historian Timothy Garton Ash succinctly put it at the time: “Kosovo is unique, and there will be more Kosovos.” This was first demonstrated in South Ossetia and Abkhazia in 2008, and then in Crimea in 2014. After the Crimean referendum, Russian president Vladimir Putin argued that the Kosovo case which “our western colleagues created with their own hands in a very similar situation” was an appropriate precedent for Crimea.

’s stance on separatism is largely an issue of framing, regardless of how many times the Western officials have stated otherwise. So, they believe that they can succeed in lobbying their case in the West if only they can construct an attractive enough narrative that will appeal to the Western audience. During the Catalan Referendum of independence in 2017, for example, the Catalonian government’s strategy was to compel the European community to intervene in Spain by trying to convince them that, just like in Kosovo, there was no other viable solution except to secede in the face of the “authoritarian nature” of the Spanish government.

Similar tactics have been employed by the Armenian government in the case of Nagorno-Karabakh as well. The Kosovo case was warmly welcomed by the Armenian separatists in Nagorno-Karabakh, the success of which they hoped to emulate. They also supported the annexation of Crimea, arguing that it was yet “another manifestation of realization of the right of people to self-determination.” Moreover, during the UN voting in March 2014, Armenia voted down the UN General Assembly resolution supporting Ukraine’s territorial integrity and declaring the annexation of Crimea illegal. At the time, Garen Nazarian, Armenia’s ambassador to the UN, framed Armenia’s decision to vote against the resolution as promoting “decolonization and self-determination.”

The Armenian advocacy groups in the West love to argue that based on the Kosovo case, the United States should urgently recognize Nagorno-Karabakh’s independence. And this is despite the fact that at the time the U.S. State Department explicitly warned that Kosovo was not a precedent and should not be seen as a precedent for any other place out there in the world and that it “certainly isn’t a precedent for Nagorno-Karabakh.” Armenian prime minister Nikol Pashinyan himself has repeatedly argued in recent months that the international community should recognize Nagorno-Karabakh as an independent state based on the principle of remedial secession. The problem is not just that the doctrine of remedial secession—which claims that secession can be accepted as the last resort for ending oppression—is a myth, does not have a strong theoretical foundation in international law, and overall has no relevance whatsoever to the “frozen conflicts” in the post-Soviet region. It also presents a false dilemma of having to choose between a well-integrated society and external self-determination while completely ignoring a much more effective third approach to the conflict resolution—an internal self-determination, which not only allows for both intergroup cooperation and sufficient autonomy to co-exist, but also is the only viable way to ensure sustained peace in the region.

Moreover, separatists often seek to gather international sympathy for their cause by attempting to present a moral case for separatism. The main problem with ethnically based right to secede however is that it is very hard sometimes to separate secessionist logic from the mentality that advocates for ethnonational purity and ethnic cleansing. By denying a chance for a more pluralistic and inclusive notion of the nation to exist, the secessionist worldview can be very regressive by its nature, and as such epitomize the very ills of ethnic nationalism that the postwar liberal order has sought to do away with. Upholding the principle of territorial integrity also makes good sense, given that there are already too many failed states in the world that undermine the stability of their surrounding regions and increase the possibility of wars and human suffering.

However, it goes further than this. Accepting the claim to external self-determination predominantly advanced by the ethnic Armenian community of Nagorno-Karabakh, which cannot alone represent the Nagorno-Karabakh population as a whole, risks legitimizing the ethnic cleansing of the Azerbaijani population of Nagorno-Karabakh. The atrocities against Azerbaijanis are still denied by the Armenian side because it does not align with the victimization narrative that has been carefully constructed over the years to legitimize violence against Azerbaijanis as resistance. Just like the Armenians, the ethnically cleansed Azerbaijani community of Nagorno-Karabakh and, in fact, all citizens of Azerbaijan have a right of self-determination, as well, which incorporates, among other things, the right to vote on the future of their country and not to have their country torn apart.

The Armenian government also loves to argue that Azerbaijan does not recognize the legitimate grievances of the Armenian community of Nagorno-Karabakh, which is blatantly false. If it were true, then, throughout the negotiation process, Azerbaijan would not have advocated for both the Azerbaijani and Armenian communities of Nagorno-Karabakh to be the interested parties of the conflict and repeatedly declared that it is ready to offer the region the highest possible autonomy existing in the world in order to allow the Armenian community to exercise their political and cultural rights to the fullest extent. If the sole reason of insisting that what happened in Nagorno-Karabakh was occupation by an aggressor state is just a complicated plot to ignore local grievances, then Azerbaijan—even now when negotiations obviously failed and Azerbaijan is winning the war that it wanted to avoid for a long time at all cost and under no obligation to do so—would not offer the region the cultural autonomy and introducing observers and peacekeepers to the region to rebuild the trust.

The fact of the matter is that the ceasefire of 1994 left Azerbaijani territories occupied by Armenia. Despite Armenia claiming otherwise, the fact of occupation has been confirmed numerous times by various impartial international bodies. In 2015, the European Court of Human Rights reaffirmed that Armenia’s military and political support to Nagorno-Karabakh amounts to “effective control” of the region. The Court pointed out the obvious fact, still vehemently rejected by Armenia, that “it is hardly conceivable that Nagorno-Karabakh—an entity with a population of less than 150,000 ethnic Armenians—was able, without the substantial military support of Armenia, to set up a defense force in early 1992 that, against the country of Azerbaijan with approximately seven million people, not only established control of the former NKAO but also, before the end of 1993, conquered the whole or major parts of seven surrounding Azerbaijani districts.” The concept of effective control lies at the heart of the notion of occupation. It is a conditio sine qua non of belligerent occupation. /nationalinterest