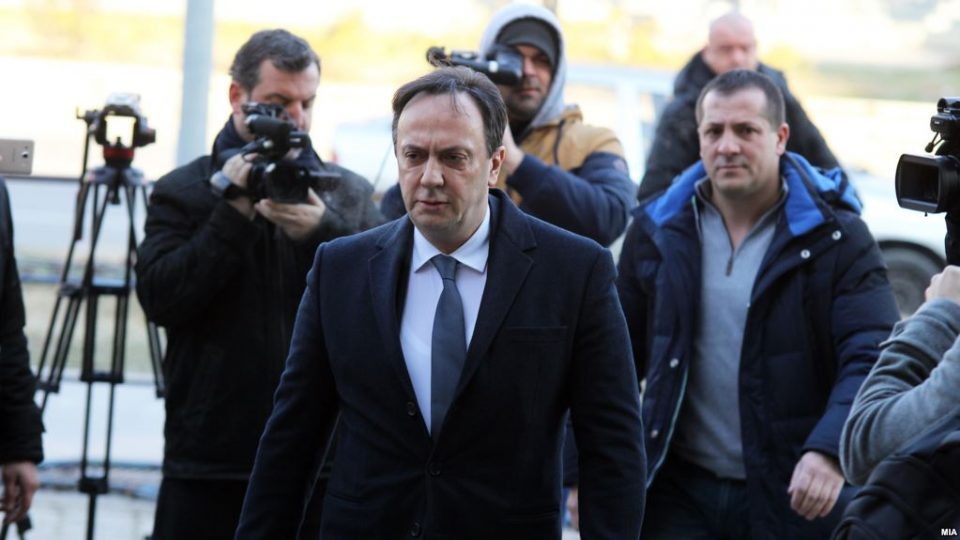 After North Macedonia’s government was savaged over the reported disapearance of the notorious ex-secret police chief Saso Mijalkov – days ahead of the verdict in his latest trial – Mijalkov’s casual reappearance on Tuesday has added insult to injury.
While the government insists it played a key role in forcing Mijalkov to surrender and so foiled his escape plans, many are not buying in to the story, accusing the government of presiding over a farce.
The ruckus started on Sunday when police failed to locate Mijalkov and place him in house detention on court orders ahead of the verdict against him in a case in which he is accused of masterminding a massive illegal wiretapping operation. The verdict is set for Friday.
After two days of fruitless searches and refusals by government officials to accept responsibility for the blunder, Mijalkov surprisingly reappeared on Tuesday evening in front of the Organised Crime Prosecution in Skopje, saying he was there to receive the order for his house detention personally.
Walking casually and with no visible police or security escort, he said he had not been hiding or trying to flee the country. He instead gave a reporter from the local TV 24 station who was present a whimsical explanation for his absence.
He said that while the entire state apparatus had been searching for him for two days, and while his family and bodyguards were being questioned for hours about his whereabouts, he had decided to isolate himself due to a high temperature and a suspicion that he had caught COVID-19.
He offered a “sincere apology” for the fuss he had caused the police, the government and the country in general, insisting that he was not the kind of person to escape and run away from problems.
Only a few hours later, at a press conference, the embarrassed government desperately tried to take the credit for Mijalkov’s reappearance.
Accompanied by Interior Minister Oliver Spasovski and Justice Minister Bojan Maricic, Prime Minister Zoran Zaev insisted he had personally coordinated the drive to bring Mijalkov in, and added that it showed that state institutions were working.
“[Carrying of] justice has been secured… thanks to the coordinated action of the institutions. Mijalkov had no other choice and did what was his only option – to hand himself in and receive his detention order,” Zaev said.
Interior Minister Spasovski, who did not take responsibility for the escape of Mijalkov’s cousin, ex-PM Nikola Gruevski, back in 2018, added that had Mijalkov failed to hand himself give in, “things would have been different in just few hours” – suggesting that the police would have nabbed him.
But, undermining the government’s claims that Mijalkov wanted to flee the country and was pressed into surrendering, the head of the Organised Crime Prosecution, Vilma Ruskovska, told the media on Tuesday that they had taken into account the “mitigating circumstance” that Mijalkov had approached them voluntarily.
Late on Tuesday, under police escort, he was sent to his home in Skopje for house detention, while Ruskovska said they had yet to assess whether they should ask to place him behind bars.
“This is a big farce” the former parliament secretary and veteran analyst Todor Pendarov said on Wednesday. “This shows we have no institutions that work … It is not the first time we witnessed such lapses. In a normal country, this would end the career of the interior minister,” he added.
“Having a disastrous situation to begin with, Zaev now tells us that they fixed things. Spasovski boasts that if [Mijalkov] did not appear, they would have caught him,” he continued.
Commenting on Mijalkov’s own explanation, Pendarov said that was equally ridiculous. “Mijalkov should have picked another illness. He had a 40 degree fever and the very next day he goes out on the street without a coat? Fat chance,” Pendarov said.
As speculation about the strange flight and return of Mijalkov runs rampant, the government has been exposed to unprecedented ridicule in media and on social netowrks.
“The entire police were searching for him [Mijalkov] – but only the reporter from TV 24 was able to catch him!” a tweet from a user called Zabushant read.
“A man cannot even get ill in this country. They will immediately issue an international arrest warrant against him,” another Tweeter user, Mence, commented.
Mijalkov is currently under 24/7 audio and video surveillance in his home, authorities say, where he is awaiting Friday’s verdict in the illegal wiretapping trial, which was code-named “Target-Fortress”. He pleaded not guilty to all charges.
The verdict is expected to provide answers to a key question: who ordered the mass surveillance of people during Gruevski’s time in office? /Birn