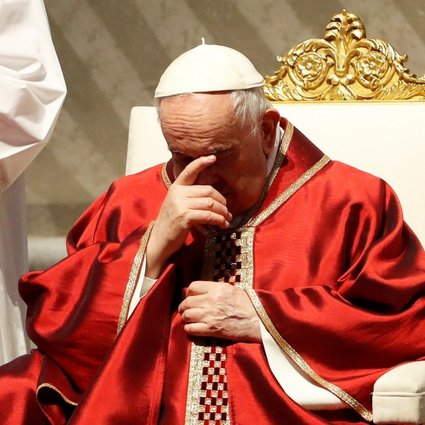 Pope Francis said Friday he understood why governments in a war-ravaged world buy weapons to defend themselves, as he prepared to preside over a traditional Easter procession. Francis has previously said that spending money on weapons “stains” humanity.

Ukrainian and Russian women are expected to carry a cross this year in the Via Crucis procession, which is held on Good Friday, the day Jesus was crucified in the Christian calendar. Ukraine’s ambassador to the Holy See on Tuesday expressed “concern” over the plan against the backdrop of Russia’s war in Ukraine.

The procession commemorates the suffering and death of Jesus, from his condemnation to his burial. The Pope will preside over it for the first time since the outbreak of the coronavirus pandemic.

A smaller version of the procession was held within St Peter’s Square in the Vatican in 2020 and 2021. Francis, who has repeatedly called for an end to the Russian offensive, said the whole “world is at war”.

He coined the slogan “this diabolical pattern of killing each other out of the desire for power, the desire for protection, the desire for many things”. The 85-year-old visited a prison in Civitavecchia near Rome on Thursday to wash his feet. Each year a sacrament was performed by 12 prisoners to celebrate Christ’s Last Supper with the apostles.

In Christian tradition, Jesus is said to have washed the apostles’ feet before a meal in a gesture of humility. On Saturday evening, Francis would preside over Easter at St Peter’s Basilica, followed by Easter Mass on Sunday morning, after which he would give the traditional “Urbi et Orbi” blessing. /Compiled by Argumentum.al