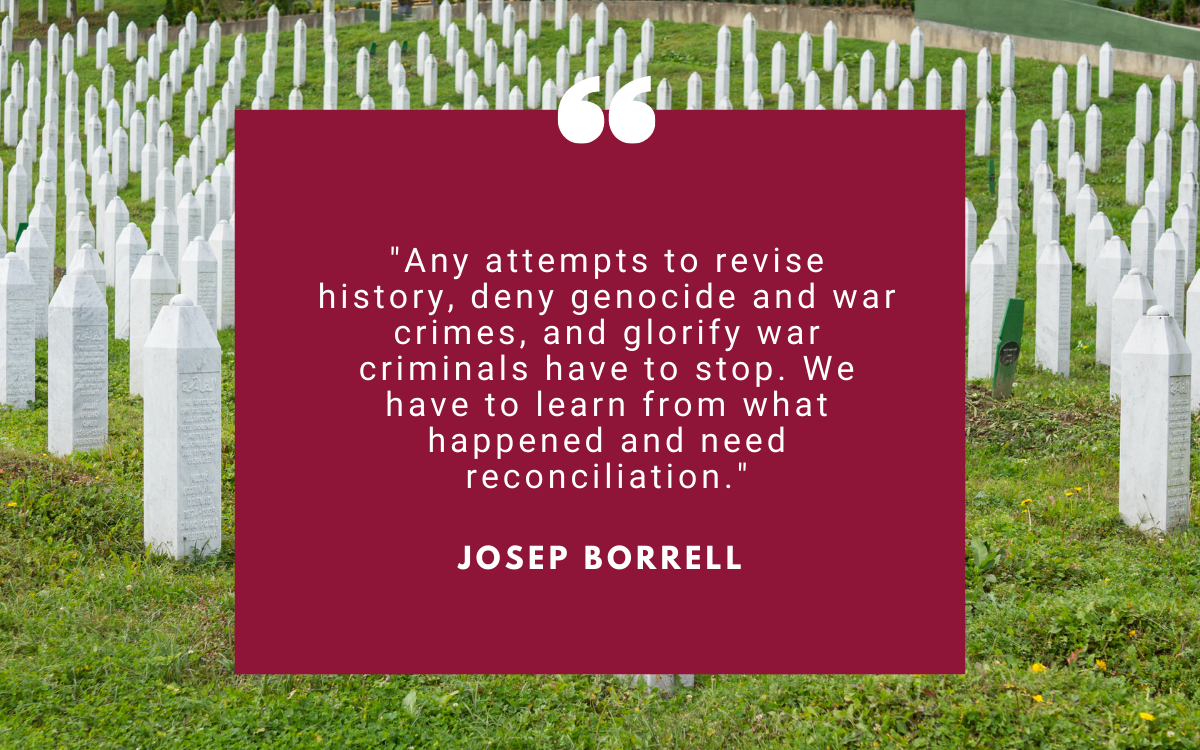 In the heart of Europe 26 years ago, the darkest page of our modern history was being written. In July 1995 in the hills around Srebrenica, over 8.000 people, mainly boys and men, were deliberately killed. This weekend, 19 more victims are laid to rest at the cemetery at the Srebrenica Memorial Centre.  We have to learn from what happened and need reconciliation to move forward.

These killings are a genocide, as recognized by the International Criminal Tribunal for ex-Yugoslavia in 2004 and the International Court of Justice in 2006. However, in Bosnia and Herzegovina and in the region there still is a tendency of denial of the Srebrenica genocide. Our duty is to remember Srebrenica and the victims, to honor the memory of those laid to rest and all those still missing, and to learn from what happened and do everything possible to prevent it from happening ever again.

“Any attempts to revise history, deny genocide and war crimes, and glorify war criminals have to stop.”

We can observe again attempts to revise history, deny genocide and war crimes, and glorify war criminals, which have to stop. Leaders from the whole region have to reject hate and divisive rhetoric and work in support of justice, promote dialogue and cooperation. The best way to achieve reconciliation is to build stronger and better societies where pluralism, justice and human dignity prevail. This is exactly what the European Union is offering to Bosnia and Herzegovina through the European path, and that is the reason why we promote reforms, political dialogue but most of all reconciliation.

Reconciliation is a strategic orientation and a day-to-day activity. In Bosnia and Herzegovina reconciliation becomes a reality through fostering dialogue and initiatives in schools, on the streets, in villages and in cities. Reconciliation starts with young people. The youth will shape the country’s development, they have the right to a qualitative and inclusive education system and deserve to live in a peaceful and just country.

Last November, I travelled to Sarajevo on the occasion of the 25th anniversary of the Dayton Peace Agreement. I visited the War Childhood Museum and met with champions of reconciliation. Paying tribute to victims of the war reminds us how essential it is to acknowledge historical facts of the past in order to learn, and to build the future. Commemorating is understanding, healing and moving forward.

The country can move forward on its European path. According to recent surveys, more than 75 percent of citizens of Bosnia and Herzegovina support this because they understand the transformative power of the European Union and the strength of the European idea.

On 13 July, I will chair the EU–Bosnia and Herzegovina Stabilisation and Association Council. This will be the first meeting after three years. I look forward to our discussion on current challenges and the way forward with the reforms needed to make the governance more effective, enhance the rule of law and unlock the economic potential. We will review progress on the 14 key priorities mentioned in the European Commission’s Opinion on the accession request of Bosnia and Herzegovina, including the sensitive, but necessary constitutional and electoral reforms.

“The history of Bosnia and Herzegovina is a part of common European history.”

EU accession is a process, which demands responsibility, leadership and vision, and joint efforts by the whole of society. And while remembering Srebrenica, the European Union reiterates its firm commitment to support Bosnia and Herzegovina in overcoming the legacies of the past, facing facts and steering societies towards a better future. The history of Bosnia and Herzegovina is a part of common European history and the future of the country and of the whole Western Balkans lies in the European Union. /July 11, 2021