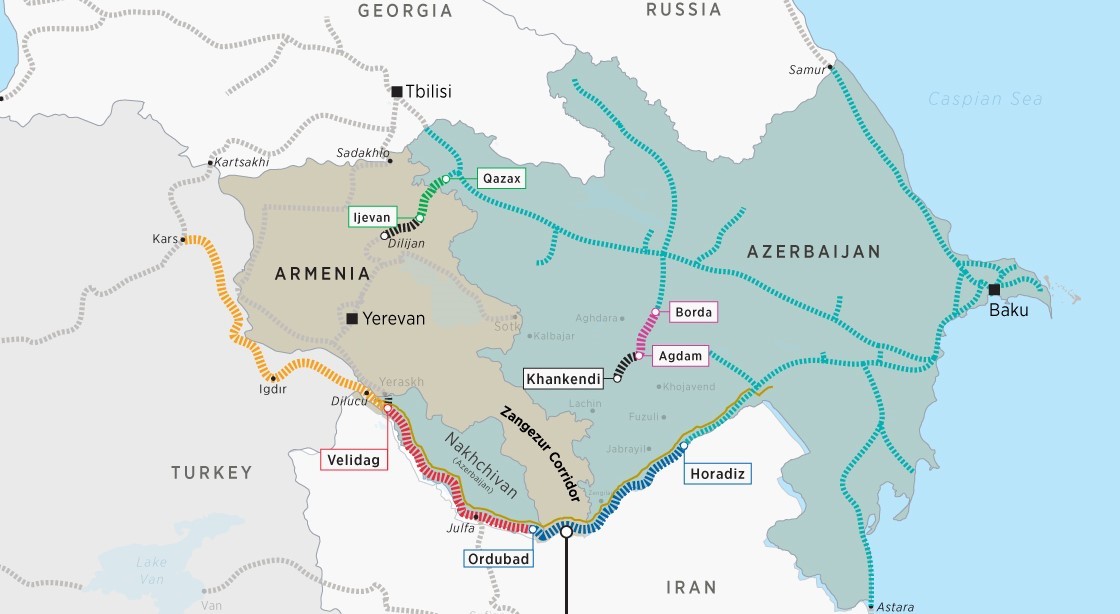 No doubt that opening of the Zangezur corridor will also be beneficial for Armenia. First, the opening of the corridor will allow Armenia to free itself from its economic isolation. After the occupation of  Azerbaijani territories in 1992–93, Azerbaijan and Turkey shut down their respective borders with Armenia. Closed borders with Turkey and Azerbaijan prevented Armenia from gaining access to a safe and sustainable land route to Russia, its main economic partner. Since the beginning of the Armenia– Azerbaijan conflict, there has been no railway connection between Armenia and Russia. The only available land route was the Upper Lars Highway, which goes through the territory of Georgia. As this road passed through geographically difficult terrain and had to be closed in cold season, it caused delays in the transportation of goods from Armenia to Russia and vice versa. Moreover, the political tensions between Georgia and Russia led to the closure of this road. Another road that passes through Georgia and used to connect Armenia and Russia by land is the railway that goes via Abkhazia, which is also closed due to the political problems between Russia and Georgia. During the Soviet era, cargo transportation between Armenia and Russia was carried out mainly by railroad through the Dilijan and Karvansara (Ijevan) settlements in Armenia, and then through the Gazakh region of Azerbaijan to Russia. This road was also closed because of the conflict. It also worth mentioning that Armenia’s aggression against Azerbaijan also led to the elimination of railway connections with Iran. After the beginning of the First Karabakh War (1988–94), the railroad that connected Armenia with Iran through Nakhchivan (Azerbaijan) was closed. The highway that continues to be used for the transportation of goods between Armenia and Iran is inefficient for transportation as it passes through a mountainous area. During the conflict, Armenia planned to build an alternative railway through the Meghri region to Iran, but the high construction costs made it impossible.

The cost of construction of the railroad was estimated at between 3.5 and 5 billion US dollars. Because of the lack of financial resources, Armenia was unable to cover these costs, and efforts to attract foreign investors did not lead to the desired results. However, in the case of the opening of the Zangezur Corridor, Armenia and Iran would restore the railway connection and it would also enable Armenia to participate in the International North–South Transport Corridor (INSTC). By using the railway connection with Iran, Armenia is also trying to change the direction of INSTC and prevent it from passing through Azerbaijan. Thus, the opening of the Zangezur corridor will allow Armenia to end its  economic isolation and restore access to Russia and Iran, as well as to the markets of the Eurasian Economic Union. Despite the fact that the November 10 Statement will mainly lead to the restoration of pre-existing roads between the countries of the region, this will change the region’s transport architecture because, during the Armenian occupation, these roads were closed and transportation policies and regional transport projects were implemented without considering them. Despite the advantages of the Zangezur Corridor, some experts in Armenia are skeptical about its opening. In their opinion, the new corridor does not serve the strategic interests of Armenia as it creates geopolitical risks and might lead to the loss of its sovereignty. They argue that, although the Trilateral Statement declares the reopening of all communications in the region, it only specifically mentions the connection between Azerbaijan and Nakhchivan (Autonomous Republic of Azerbaijan), which means that the main focus is towards the reopening of this specific road. Therefore, this is the only feasible project for the near future. According to Armenian experts, the opening of the Zangezur Corridor without opening other communications routes will create additional geopolitical risks that outweigh the economic benefits for Armenia. Another argument against the Zangezur Corridor is that the transportation of goods from Armenia to Russia through the Zangezur Corridor covers a longer distance, and the most efficient way to transport goods from Armenia to Russia is to use the traditional Karvansara (Ijevan)–Gazakh road. In order to make this road operational, a short section in Armenian territory needs to be repaired. It has also been pointed out that no peace agreement has been signed between the parties following the war, and there is the possibility of an outbreak of a new military conflict. Armenian experts also think that, after the opening of the Zangezur Corridor, Armenia will lose its sovereignty in the area through which the corridor passes. According to the Trilateral Statement, control of the corridor will be exercised by the Russian Federal Security Service for an indeterminate period of time. Therefore, the Armenian government has to be sure that, after some set time, control over the corridor will be transferred to Armenia.

On the other hand, Armenia wants to have the right to close this road whenever it feels there is a threat to its national interests. However, the November 10  does not give Armenia such rights. Thus, there is an argument that Armenia should not allow the corridor to be opened if Armenia will lose its sovereignty and be unable to protect its national interests. Taking into consideration the above arguments, we can say that the Armenian side believes that the geopolitical risks of the Zangezur Corridor for Armenia are much greater than the economic benefits, and, therefore, the Armenian government should delay or prevent the opening of this corridor. Armenia could agree to the opening of the corridor only if other regional communications that are beneficial for Armenia are opened and the security of these roads is ensured, as for the Zangezur Corridor. However, Armenia has already signed the November 10 statement and is therefore obliged to fulfill its obligations. If Armenia prevents the opening of the corridor, Azerbaijan will have the right to act likewise in regard to other clauses of the Trilateral Statement, such as that concerning the Lachin Corridor. If the Zangezur Corridor is not opened, then Azerbaijan will not allow the opening of other roads, which means that the economic isolation of Armenia will continue, which is not beneficial for its economy. On the other hand, Armenia’s resistance to the corridor will be perceived as a policy directed against cooperation in the region and that does not serve the interests of other regional countries. Therefore, these countries, especially Russia, might put pressure on Armenia to open the corridor. It is also worth mentioning that the fears of Armenia regarding the loss of its sovereignty over the corridor and increasing Russian control are surprising, as Armenia’s borders with Turkey and Iran are guarded by the Russian military and Armenia’s railway system, gas distribution company, and other crucial economic sectors are controlled by Russian companies. Thus, the concerns raised by Armenia regarding its sovereignty are unjustified and merely an excuse used by forces that want to prevent the opening of the Zangezur Corridor. If the corridor is opened, it will give impetus to other roads, which will be directly beneficial for Armenia. It appears that the Armenian government is interested in the opening of the corridor—or, at least, realizes the necessity of opening it. The cautious acts of Armenian officials regarding the corridor are related to the fears of discontent against the government within the population. Opinions against the corridor in Armenia are mainly voiced by nationalist groups, which are supported by a large part of the population. It has also become a tool in the hands of the opposition for attacking the current government. Therefore, as the political situation in the country stabilizes and the benefits of opening the Zangezur Corridor and other roads become apparent, the Armenians might change their attitude toward the corridor.