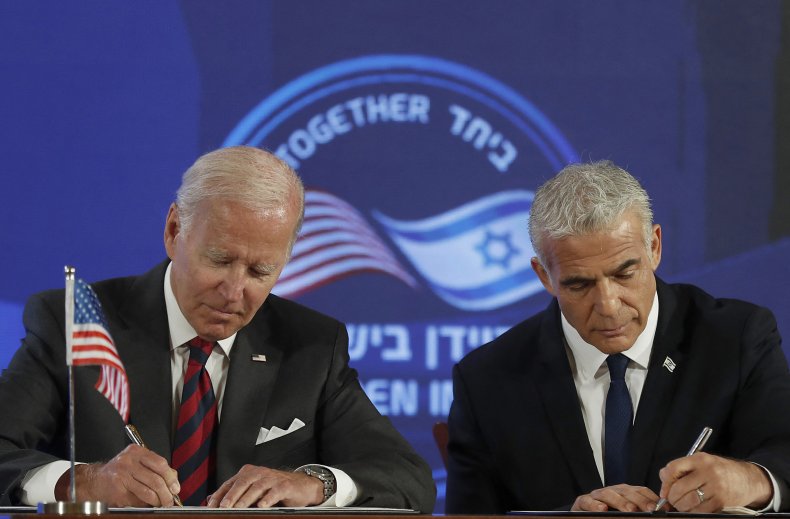 On the second day of his Middle East trip US President Joe Biden and Israeli Prime Minister Yair Lapid will on Thursday sign a joint agreement pledging to prevent Iran from acquiring a nuclear weapon.

A senior Biden administration official, describing the joint declaration for reporters in a conference call, said the agreement will expand on the long-standing security relationship between the United States and Israel.

“This declaration is pretty significant and it includes a commitment to never allow Iran to acquire a nuclear weapon and to address Iran’s destabilising activities, particularly threats to Israel,” the official said.

Biden, on his first Middle East trip since taking office in early 2021, arrived in Israel on Wednesday and had talks with Israeli leaders on Thursday. He was due appear at a joint news conference with Lapid.

Biden will meet Palestinian leaders in the occupied West Bank on Friday and hold talks with leaders of Saudi Arabia and other Gulf and Arab allies in Jeddah on Saturday.

Biden is looking at an uphill battle persuading Iran to rejoin the Iran nuclear agreement which his predecessor, Donald Trump, abandoned in 2018.

Biden is likely to face questions from Israel and from Gulf states such as Saudi Arabia and the United Arab Emirates about the wisdom of reviving the Iran nuclear deal and what the United States will do to counter Iran’s regional actions, regardless of whether the deal is resurrected.