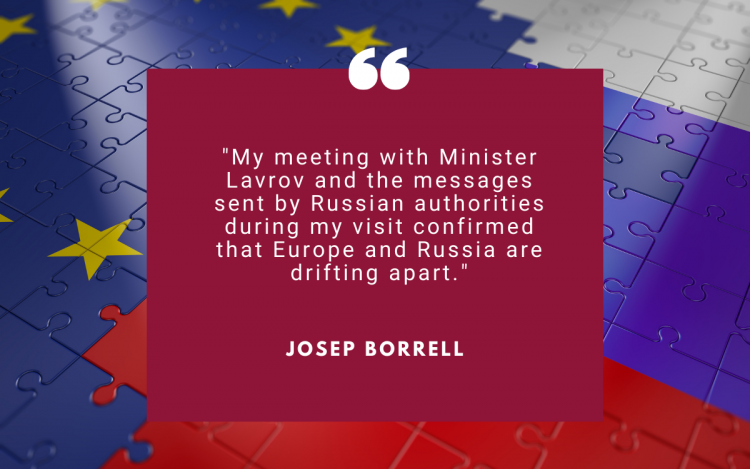 I went to Moscow this week to test, through principled diplomacy, whether the Russian government was interested in addressing differences and reversing the negative trend in our relations. The reaction I received points visibly in a different direction. So, as EU we will have to reflect on the broader implications and chart a way forward. We are at a crossroads. The main parameters of the geopolitical landscape of the 21st century are being drawn.

I have just returned from a very complicated visit to Moscow, on which I had embarked to discuss the fraught state of EU-Russia relations. They have been  low for a number of years, and deteriorated even further after recent developments linked to the poisoning, arrest, and sentencing of Alexei Navalny as well as the related mass arrests of thousands of demonstrators. The purpose of this mission was to express directly the EU’s strong condemnation of these events and to address, through principled diplomacy, the process of a rapid worsening of our relationship with Russia, and to help prepare the forthcoming European Council discussions on EU-Russia relations.

“The Russian authorities did not want to seize this opportunity to have a more constructive dialogue with the EU. This is regrettable and we will have to draw the consequences.”

An aggressively-staged press conference and the expulsion of three EU diplomats during my visit indicate that the Russian authorities did not want to seize this opportunity to have a more constructive dialogue with the EU. While not fully unexpected, this is regrettable, also, dare I say, from a Russian strategic perspective. As EU, we will have to draw the consequences, reflect carefully on the direction we want to give to our relations with Russia and proceed in a united manner with determination.

“At times the discussion with my Russian counterpart reached high levels of tension, as I called for Mr. Navalny’s immediate and unconditional release, as well as for a full and impartial investigation into his assassination attempt.”

Human rights issues and fundamental freedoms, and in particular the case of Alexei Navalny were very much at the centre of my visit and of my exchanges with Foreign Minister Lavrov. At times, the discussion with my Russian counterpart reached high levels of tension, as I called for Mr. Navalny’s immediate and unconditional release, as well as for a full and impartial investigation into his assassination attempt. I reminded Minister Lavrov that Russia’s obligations in the field of human rights stem from international commitments it has freely assumed (i.e. the European Convention on Human Rights of the Council of Europe), and cannot therefore be discarded as interference in internal affairs. I reiterated these points in the press briefing.

I also met also with representatives of civil society, think tanks and representatives of the European business community. Despite huge challenges and dwindling space, civil society continues to play a vital role in promoting respect for democracy, fundamental freedoms and human rights. I pay tribute to their work and to what they represent. My team had contacts with Mr. Navalny’s close circle to signify our support. Unfortunately, I could not meet him as he was standing trial during my visit. I further expressed EU support to human rights and political freedoms by paying tribute to Boris Nemtsov, a leading opposition figure, at the bridge where he was murdered six years ago.

In my exchanges with Minister Lavrov, in addition to human rights issues and diverging views, we also explored broader aspects of our relations, including the potential for cooperation in facing global challenges such as the Covid-19 pandemic, the climate crisis and in the Arctic region which are areas where we could find common interests.

We also discussed conflicts in our immediate neighbourhood, and I insisted on the need to advance towards the full implementation of the Minsk agreement and on respect for Ukraine’s territorial integrity. I argued as well the need to heed the call of the people of Belarus – which has been loud and clear for six months now – to freely choose their President. Respect for the territorial integrity of Georgia, the situation in Nagorno Karabakh, and the Syrian and Libyan crises were also among the issues we touched upon in a review of our troubled neighbourhood, where Russia and the European Union remain more often than not at odds. In discussing all of this, I stressed here should be full respect for OSCE commitments, including respect for territorial integrity.

We also acknowledged the need to keep good cooperation on the Iran nuclear deal (the JCPOA) and the potential for joint engagement in supporting peace and reconciliation efforts in the Palestinian-Israeli conflict.

“My meeting with Minister Lavrov highlighted that Europe and Russia are drifting apart. It seems that Russia is progressively disconnecting itself from Europe.”

I had planned this trip to convey EU positions and to stress our fundamental concerns, but also to test if in some areas where our interests converge, we can try to cooperate, and start building some trust. Regrettably, at the very end of our meeting we learned, through social media, of the expulsion of three EU diplomats on unfounded allegations that they did not comply with their status as foreign diplomats by participating in demonstrations. I asked Minister Lavrov to reverse this decision, but to no avail.

I returned to Brussels with deep concerns over the perspectives of development of Russian society and Russia’s geostrategic choices. My meeting with Minister Lavrov and the messages sent by Russian authorities during this visit confirmed that Europe and Russia are drifting apart. It seems that Russia is progressively disconnecting itself from Europe and looking at democratic values as an existential threat.

We are at a crossroads. The strategic choices we make now will determine international power dynamics in the 21st century, and notably whether we will advance towards more cooperative or more polarised models, based on closed or on freer societies. The European Union can influence these developments, which requires a clear vision and objectives, accompanied by intense diplomatic engagement, supported by our many means of external action and projection of influence.

We will discuss these issues with my fellow EU foreign ministers. As ever, it will be for member states to decide the next steps, and yes, these could include sanctions. And we also have another tool in this respect, thanks to the recently approved EU human’s rights sanctions regime.

The nature of the challenge we face is clear. Locking ourselves up behind walls and calling on others from the safety of that position will not bring greater security to the EU. And it is not in this way that I see my role as being the first diplomat of the EU. We have to face challenges, including meeting others in their home turf, just when negative events are unfolding to allow us to better assess the situations we are confronting and the actions we should take. I prefer this to remaining reactive and waiting for things to happen. If we want a safer world for tomorrow, we have to act decidedly today and be ready to take some risks.

<blockquote class=”twitter-tweet”><p lang=”en” dir=”ltr”>My visit to Moscow highlighted that Russia does not want to seize the opportunity to have a more constructive dialogue with the EU. This is regrettable and we will have to draw the consequences. <br><br>Read my blog post:<a href=”https://t.co/S3QP2uSsNO”>https://t.co/S3QP2uSsNO</a> <a href=”https://t.co/q8pUDbEFAF”>pic.twitter.com/q8pUDbEFAF</a></p>&mdash; Josep Borrell Fontelles (@JosepBorrellF) <a href=”https://twitter.com/JosepBorrellF/status/1358488437641338886?ref_src=twsrc%5Etfw”>February 7, 2021</a></blockquote> <script async src=”https://platform.twitter.com/widgets.js” charset=”utf-8″></script>