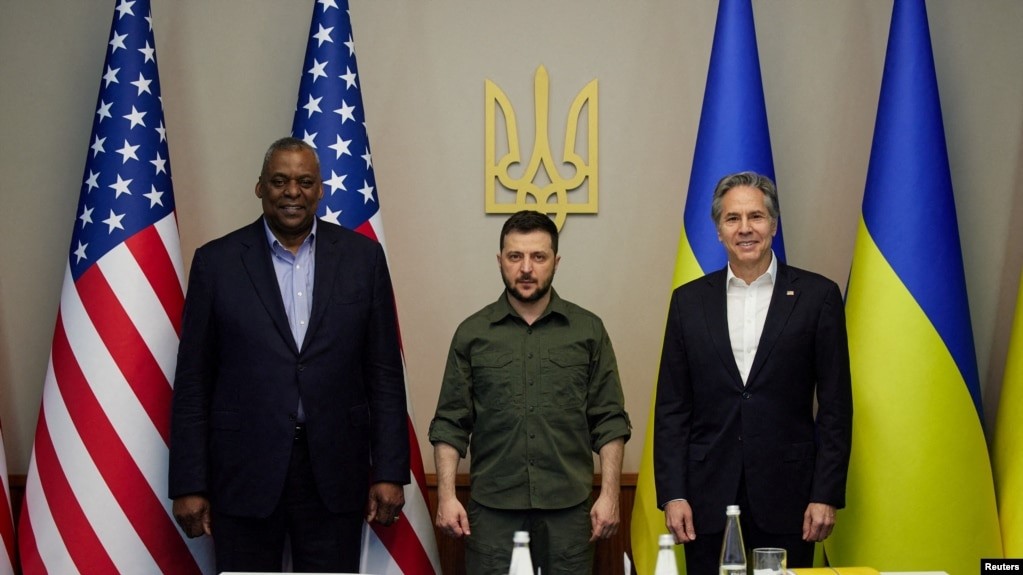 Secretary of State Antony Blinken and Defense Secretary Lloyd Austin said Monday after a secrecy-shrouded visit to Kyiv that Ukrainian President Volodomyr Zelenskyy is committed to winning his country’s fight against Russia and that the United States will help him achieve that goal.

“He has the mindset that they want to win, and we have the mindset that we want to help them win,” Austin told reporters in Poland, the day after the three-hour face-to-face meeting with Zelenskyy in Ukraine.
Austin said that the nature of the fight in Ukraine had changed now that Russia has pulled away from the wooded northern regions to focus on the eastern industrial heartland of the Donbas. Because the nature of the fight has evolved, so have Ukraine’s military needs, and Zelenskyy is now focused on more tanks, artillery and other munitions.

“The first step in winning is believing that you can win,” Austin said. “We believe that they can win if they have the right equipment, the right support, and we’re going to do everything we can … to ensure that gets to them.”
Asked about what the U.S. sees as success, Austin said that “we want to see Ukraine remain a sovereign country, a democratic country able to protect its sovereign territory. We want to see Russia weakened to the point where it can’t do things like invade Ukraine.”
The trip by Blinken and Austin was the highest-level American visit to the capital since Russia invaded in late February.
They told Zelenskyy and his advisers that the U.S. would provide more than $300 million in foreign military financing and had approved a $165 million sale of ammunition.

Last month, Poland said it was ready to send all its MiG-29 jets to the Ramstein Air Base in Germany and put them at the disposal of the US, but that offer was rejected by US officials.
French president Emmanuel Macron and US president Joe Biden agreed in a phone call today to “rapidly” have more detail discussions on a number of global issues, including the war in Ukraine, reports Reuters.

During today’s congratulatory phone call following Macron’s recent re-election, the two world leaders agreed that they should increase discussions on a number of “major global issues… And in particular on global issues related to the war in Ukraine such as food security,” according to a readout of the phone call.
“Biden conveyed his readiness to continue working closely with President Macron on our shared global priorities,” said the White House in a separate statement. /Compiled from wires