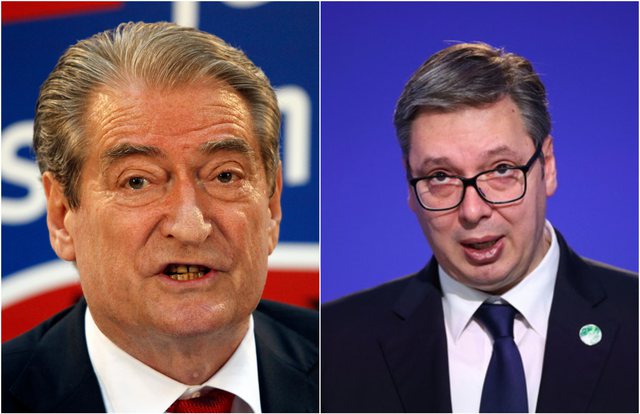 TIRANA, July 31 – The chairman of the Democratic Party (DP), Sali Berisha, reacted to the statement of Serbian President Aleksandar Vucic in a post on FB on Sunday after the decision to apply reciprocity for license plates between Kosovo and Serbia, which will come into force on Monday.

Berisha, a former PM, described Vucic’s statement as threatening, as Kosovo will not recognize Serbian documents starting on Monday, and will stop using Serbian license plates after two months.

“President of Great Serbia Vucic vowed at the beginning of July for a lethal ‘reaction’ to the decision of the Government of Kosovo to establish reciprocity, equality between the two countries in the use of identity cards and vehicle license plates, making the use of the license plate mandatory by the citizens of the Republic of Kosovo throughout its territory, regardless of their ethnic origin,” said Berisha, who added that this decision of the Kosovo government is based on an agreement signed in Brussels years ago by the governments of the two countries.

According to him, after the threat a month ago for a deadly reaction to Kosovo, the president of Great Serbia Vucic called an extraordinary press conference on Sunday in which he openly threatened the West by stating that “I don’t believe you want conflict in Kosovo”.

“This reaction with a deadly threat proves that blind Serbian nationalism is today the same as in the time of Milosevic, a very dangerous powder keg for the Balkans,” said Berisha, who saw in Vucic a small Putin of the Balkans.

Berisha considered the threat of Vucic a casus belli and warned the Serbian president to leave threats and not to dare any adventurous act because the fate of the butcher of the Balkans, his spiritual father Slobodan Milishevic, awaits him. /Argumentum.al