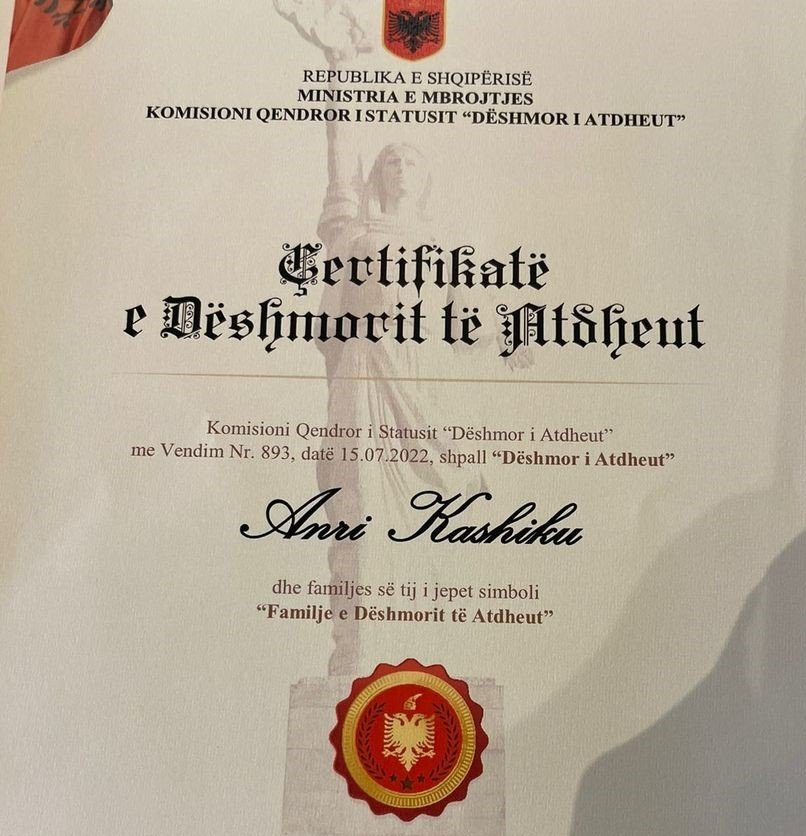 Anri Kashiku lost his life a few days ago (July 14) at the age of 18 at the beach ‘Sector Rinia’, in Durrës. The announcement of the State Police made public that the coast guard and the citizen A. K., the brother of one of the minors, entered the sea to help the children.
“The children were brought to the shore after being helped, while the 18-year-old A. K. could not get out as he drowned due to high waves,” informed the Police.
What tragic news on a teenager who had his whole future ahead of him. The loss of his life while saving two other lives has saddened not only his family and acquaintances but everyone who learned of this sad news.
His heroic act was put on spotlight immediately, and Anri Kashiku was the HERO boy on every social network and online media as a form of consolation for his family.
Even the Albanian politicians have rightly honored the act of the young man, describing his selfless act as a true Hero!

The President of the Republic, Mr. Ilir Meta wrote:

Gratitude and the deepest respect for this extraordinary man who saved two lives today, making his sublime sacrifice to be immortalized in our memory as a symbol of selflessness, love for life and the highest human values.
My deepest condolences to the family!

The chairman of the Democratic Party Mr. Sali Berisha

Friends, the 18-year-old Anri Kashiku saved two lives today like a true hero, but he himself remained in the waters of the Adriatic to become immortal with his deed.
Sharing the pain and mourning with the Kashiku family for this irreparable loss, we pray to God that the pure soul of the savior, Anri finds the deserved peace. Amen! sb

Anri Kashiku, the boy who gave his life to save two lives, his 15-year-old younger brother, Ersian, and his friend, deserves the respect, honor and gratitude of the whole society.
Dedication and heroism to the point of self-sacrifice turned Anri from a simple man to a symbolic citizen. Condolences to the family for the loss of Anri!
Gratitude to it for raising a hero!

Meanwhile, Prime Minister Edi Rama went personally to the family of Anri Kashik, in Durrës, to express his condolences.
With flowers in his hands and accompanied by the Minister of Tourism and Environment, Mirela Kumbaro, the Prime Minister expressed his condolences to the family by handing over the certificate of declaration “Martyr of the Motherland” to Anri Kashiku.
“According to the new law that we have adopted and which is related to acts of heroism, and he saved two lives, he (Anri Kashiku) is declared “Martyr of the Motherland,” said Prime Minister Rama.

A consolation for the young man’s family and pride that their beloved son is now a “Martyr of the Motherland”
What a heavy weight this title carries like the burden of this land that will forever weigh on Anri.
But while Prime Minister Rama seems to have eased the pain of the family for the loss of their son, in fact he has rather removed the burden of responsibility that rests on the shoulders of his government.
But why is Rama government responsible?
It should be reminded that the National Coastal Agency has been established since years, which, among other things, is responsible for safety in the beach. Watchtower guards as well as the designation of entrance and exit corridors of water motor boats close to the shore are two key elements for the safety of vacationers.
Both of these elements are overlooked every year, causing losses of life on the Albanian coast. There are not a few the accidents at sea by water motor boats as a result of which vacationers have lost their life. While the cases of losses of life at sea due to carelessness and lack of lifeguards, are numerous.

According to the Decision of the Council of Ministers, every entity that receives permission to use the beach area must be equipped with the coast guard watchtowers.
And in fact the watchtowers do exist. But the lifeguards are missing. Even where there are lifeguards, their only function is to signal with a flag whether vacationers can go into the sea or not.
It is to be emphasized that the entire infrastructure of rescue and first aid provision for the drowned after being pulled from the sea is missing.

Also it will be necessary not only for the police to patrol on bicycles that take hours to get from one corner to another of the beach, but above all a summer ambulance will be needed at key points that guarantees immediate help, such as for those who are in danger of drowning but also those cases of heart attack. There is an increase of the number of such cases when vacationers have lost their lives over the last years.
All these are the responsibility of the state together with the private sector in cases where that space in the beach area is given to the private sector for use during the summer season. In addition the state must provide lifeguards for vacationers at public beaches through the national sea agency or the ministry of tourism.
And while no state agency takes responsibility for the loss of life of the 18-year-old boy at the beach of the village Rinia in Durres, this government makes the family thank him for the title granted as “Martyr of the Fatherland”.
Truly, he is the hero of his brother., he is the hero of his brother’s friend who saved their lives, .he is the pride and hero of the family, but that boy should never have lost his life as a “Martyr of the Fatherland”.

The fatherland has a government and a prime minister who has unlimited power to take care of his people and to ensure life and not to distribute decorations on the coffins of young Albanians.
Here the issue is not whether or not Anri deserves to be declared a Martyr… above all that boy deserved to be alive among us.
That title “Martyr of the Motherland” helps the government more, which covers up its irresponsibility with an imposed title.
We are not at war… and yet, in recent years, the martyrs of the nation have been added to Albanians over the years as they covered up the government’s failure through their acts of self-denial.

Yes, the government failed a year ago with the martyrdom of Arian Sala, another young man who lost his life to save the lives of his colleagues. Unfortunately, Sala’s body remained trapped for 3 days in a row, as the fire brigade could not intervene due to the difficult terrain, and it was not in some remote area of Albania, but in the heart of Tirana.
The government failed again today…as it laid a bouquet of flowers on the coffin of a young boy who had his whole future ahead of him.

How courageous you are today in the year 2022 taking the road to declare an 18 year old boy a Martyr. And what for? Because he gave a hard slap on your face, though not your conscience.

Mr. Prime Minister… just do your job and let the administration you lead do its job.
Leave the titles of martyrs for the times of war… Enough with Heroism, but only Responsibility!
Rest in Peace dear ANRI!