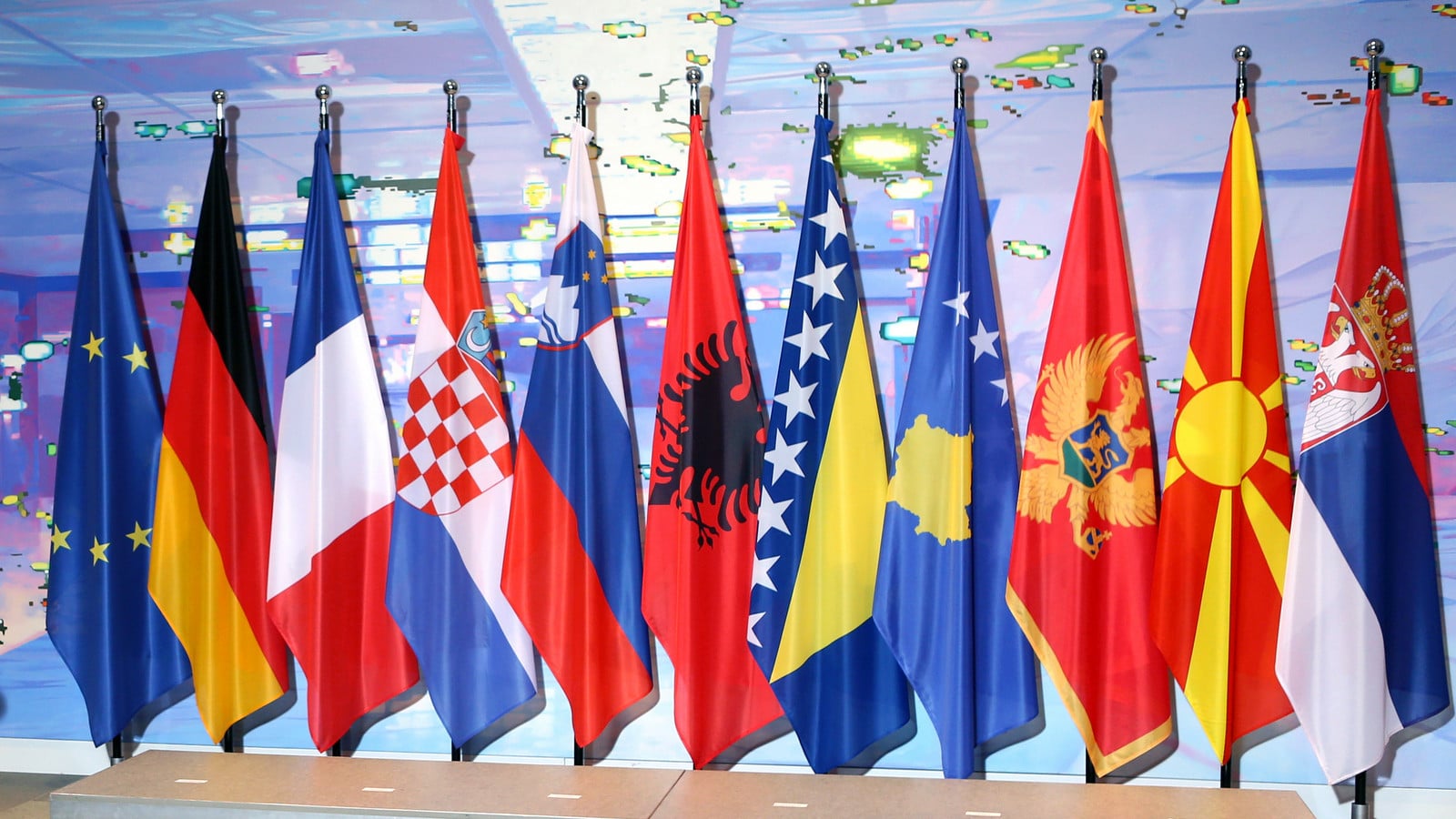 The EU and Western Balkans countries summit scheduled to take place on 5 and 6 October 2021 in Brdo pri Kranj, Slovenia is a part of strategic cooperation between the European Union and Western Balkans.
The European Union was established as a peace project after the end of World War II and it facilitated establishment of enduring peace and long-term stability in Europe. In the recent history, the Western Balkans region experienced a number of wars, after which fragile and peace and latent stability was established.

Analysts believe that EU leaders have to be aware of the fact that if they wish the peace project of the EU to be spread to the rest of Europe it needs to be implemented in the Western Balkans countries, because their membership in the EU would provide for enduring peace and long-term stability in countries of the region. As long as the EU has unstable Western Balkans region in its neighborhood, it will not be able to address key issues and challenges or its long-term strategic positioning on the international scene.

The credibility of the EU in West Balkans is undermined. Maybe the last chance to save the Wester Balkans countries from the “grip” of Russia, China, Turkey and some other states would be to unblock, at the EU-Western Balkans summit, the start of talks between the EU and North Macedonia and Albania, as well as to rapidly work on finalization of the dialogue between official Belgrade and Pristina and signing of a legally binding agreement on normalization of relations. At the same time, Western Balkans countries should intensively work to further the already commenced regional cooperation, particularly the “Open Balkan” initiative[2] .

The criticism, remarks and comments by the EU are predominantly related to the situation in the area of judiciary and the rule of law. The criticism is often justified, because there is a deficit in the rule of law, as was confirmed by numerous national and international reports. However, the credibility of the EU has been seriously undermined in the Western Balkans since the Hungarian Prime Minister Viktor Orban (Fidesz) offered asylum to a convicted criminal and former Macedonian Prime Minister Nikola Gruevski (VMRO-DPMNE), against whom an international arrest warrant had been issued. In fact, some leaders from the European People’s Party (EPP) not only provide support and protection to Gruevski, but are also working to arrange his return to North Macedonia.

According to analysts, Slovenia and its Prime Minister Janez Janša (SDS/EPP), who currently presides over the Council of the EU, should invite (call on) Hungary and its Prime Minister Viktor Orban to demonstrate the rule of law in practice and extradite Gruevski to Macedonian authorities on the basis of the international arrest warrant issued by North Macedonia. This would be a strong symbolic gesture, which would show that the EU is based on the rule of law and convey a message to the Western Balkan countries to work to promote the rule of law and judicial reform. Everything else would remain at level of platitudes such as the ones that the EU reaffirms the European perspective of the Western Balkans, but without any concrete steps forward. Charles Michel, President of the European Council is echoing the same platitudes in the eve of the EU-West Balkan summit, when he speaks about strengthening the cooperation and economic recovery of the Western Balkans, while not mention at all the enlargement process or the agenda for integration of the Western Balkans countries into the EU.

EU member countries have to show visionary thinking with respect to the enlargement process, because without the enlargement process the EU would have never evolved into such a respectable regional integration process. Bearing in mind that EU has 27 members, there is always a possibility of various kinds of conditioning and blocking, which member countries should strive to avoid. Specifically, they should strive to devise an institutional response to the issue. This is particularly important in the circumstances when Russia, China, Turkey and other countries are trying to strengthen their influence in the region. The indecisiveness of the EU can have strategic consequences in the West Balkans. Namely, because of the uncertainty of the EU enlargement process and public pressure individual countries could potentially change their geopolitical orientation.

Analysts hold that it is necessary to revive the initiative from the period of the first Slovenian chairmanship of the EU (2008). The initiative envisaged that the countries that become EU members should undertake not to block membership of candidate-countries in the EU and that member countries should consider integration of all six countries, as a package, into the EU – just as was done in 2004 when 10 countries were coopted into the EU. Namely, all Western Balkans countries together have a population of 18 million, which is less than a half of Polish population.

Recent developments on the norther part of Kosovo reminded us once again briefly of the horrible scenes from the nineties of the last century. Such scenes were not productive or useful for anyone. Hence, it is good that Aleksandar Vučić (SNS) and Albin Kurti (LVV), with the assistance of official Brussels, had found the strength to overcome this issue. This reaffirmed once again that for a long period of time already Serbia is not a retrograde factor but a regional engine of European integration of all six countries of the Western Balkans.

Reports by EU institutions often included assessments that Serbia is the engine of normalization of the Western Balkans, as well as the engine of European integration of the Western Balkans countries. The process of integration of Serbia into the EU has been particularly intensified over the past few years. However, the fact that for two years already Serbia has not opened a single new negotiations chapter brings into question EU’s intentions and plans regarding enlargement.

Analysts believe that Serbia has the strongest and most developed human resources and logistic infrastructure with which in a relatively short period of time it can respond to the challenges of the negotiations process and justify the attribute of being the engine of European integration in the Western Balkans. Simultaneously, signing of a comprehensive and binding agreement on normalization of relations between Serbia and Kosovo should actually also mean an agreement on membership of Serbia and Kosovo in the EU.

Organization of the “Manjača 2021” tactical military exercise of BiH and Serbia, which involves Armed Forces of BiH and the Serbian Armed Forces and will take place from 9 October to 16 October 2021 at the Manjača training range, not only  constitutes a contribution to peace and stability, but is also an indicator and a positive example of development of good bilateral cooperation between the two military formations, which are establishing partner relations -which has not been the case in recent history.

The region’s prospects lay in cooperation and inter-connections, which require peace and stability. Recently the “mini-Schengen” initiative evolved into an “Open Balkan” initiative, which aims to bring together all the countries from the region. The analyses have shown that had the “Open Balkan” initiative been established prior to the outbreak of the Covid-19 pandemic, the states and the region as a whole would have been able to respond to the pandemic more adequately and successfully. Partial responses to the pandemic yielded partial results. The importance of cooperation is best seen in the cases when countries are affected by natural disasters: fires, earthquakes, floods, etc.

The importance of cooperation is best seen through the prism of relations towards the EU. A voice of one country with respect to the EU does not mean much. However, a joint approach of all six countries of the Western Balkans to the EU would generate a new quality and strength. The “Open Balkan” initiative is not an alternative to the EU, but an accelerated path to prepare the countries as rapidly as possible for membership in the EU and utilize all the unused mutual opportunities and synergy. The “economy of scale” is an important element for regional cooperation. The “Open Balkan” project would be the embryo of new clusters, which would be established in the region and constitute a competitive edge for both the countries and the region as a whole.

For the “Open Balkan” initiative to succeed, it is necessary to stop the detrimental political rhetoric and ensure proper facing with the recent history. That is why it is important to suspend the arrest warrants between Serbia and Bosnia and Herzegovina for the war crime suspects and base the cooperation between the offices of the prosecutor in Bosnia and Herzegovina, Serbia and Croatia on the signed protocols.

According to analysts, the Western Balkans countries have to establish stronger political, economic, cultural, sport and every other form of cooperation and pursue a joint approach towards the EU, as a group of countries with clearly defined requests and interests. When it comes to enlargement of the EU, it is necessary to specify whether there will be any enlargement and when, because the EU enlargement cannot be endlessly postponed. The uncertainty of the EU enlargement process will benefit the EU rivals and the part of the public on the West Balkans that is against membership of their respective countries in the EU. Regional cooperation does not mean that countries in the region have given up on their European path and membership in the EU.

Undermined credibility of EU and its leaders?

The EU always sets new conditions, that is criteria, for membership to the Western Balkans countries. Analysts warn that many EU member countries would not fully met the requirements for membership that are set forth to the Western Balkans countries. An example of this that is used in this context is that the EU had turned a blind eye when it came to granting of membership to Bulgaria and Rumania, as well as Croatia. Another indicator of inconsistency of the EU is the fact that back in 2004, 9.5 countries were granted membership- as only a half of Cyprus was coopted into the EU. Corsica, an administrative region in France, and Sicily, an autonomous region in Italy, are often used as examples of areas in which the EU regulations do not function at all in line with the requirements specified in EU standards, regulations and directives.

Analysts warn that a significant part of EU members does not see the EU as a system of values and legal regulations, but strive to syphon as much funds as possible from EU funds and pay as little as possible into the EU budget. In fact, the EU member countries that pay significantly less into the EU budget than they receive from EU funds are simultaneously also the ones that create most of the problems in the EU. This primarily applies to countries that are members of the so-called Visegrad Group (Hungary, Poland, Czech Republic and Slovakia), as well as Bulgaria and some other countries. Admission of new member countries in the EU is primarily an issue of political will. So, in the EU, is there the political will for enlargement?/IFIMES