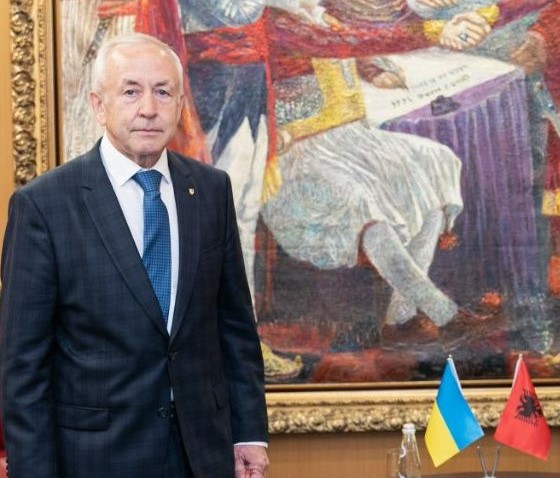 While tensions between Ukraine and Russia are at their hottest peak since the peace was reached in 2015, the Ambassador of Ukraine to Albania, Mr. Volodymyr Shkurov, held an exclusive conversation with Argumentum.al dwelling at length on the current tense situation between Ukraine and Russia, challenges and perspectives of the course of the events.

“The deterioration of the relations between Ukraine and Russia is currently at an unprecedented level. The threat of a military intervention by the Russian Federation in Ukraine is being seriously discussed both in Ukraine and around the world. The general thought is that it will have devastating consequences for the entire world order. Ukraine is fully aware of the danger of escalating tensions, although our direct dialogue with Russia is taking place, to put it mildly, not at the right level,” said Ambassador Shkurov.

Despite the Russia-US-NATO meetings and talks, the Ukrainian Ambassador to Albania said that the negotiations should not be stopped no matter how long they may take.

“Ukraine is interested in continuing the relevant negotiations and wants that no negotiations should be held without its presence. We stand for a diplomatic solution. We stand for negotiations, no matter how long they may take because we understand well the value of human life and all the dangers of military conflict,” said the Ambassador.

However, it seems that Ukraine has its eyes set on Europe. “As a sign of solidarity with Ukraine, the Romanian Foreign Minister, Bohdan Aurescu, proposed that a meeting of the Council of Foreign Ministers of the European Union be held in Kiev. You know that the EU Council of Foreign Ministers is the highest body of the European Union, which adopts de facto joint decisions and forms a united position of the member states on foreign and security policy issues. Ukraine supports such an initiative and will welcome the EU foreign ministers in Kiev,” said the Ukrainian ambassador to Tirana.

Asked about Germany’s refusal to send weapons to Kiev, unlike the US and the UK, Ambassador Shkurov noted that it would be beneficial for all of us to hear a decisive voice from Europe.

“Germany is one of the most powerful European countries, whose position must be taken into account in one way or another. Germany has its own reserves for the transfer of weapons to Ukraine, based on its historical experience and political vision. Honestly, we would like to hear a voice from Europe and for it to be decisive. It would be useful for everyone,” said the Ambassador.

Mr. Shkurov is the first resident Ambassador of Ukraine to Albania, so the focus of his mandate is precisely on strengthening the friendly relations between our states and peoples. To this end, the Embassy is actively working towards the development of real economic ties and the improvement of trade and business relations between our countries, he said.

“For Ukraine, the opening of its Embassy in Albania is of great importance, in the first place, given the importance of the Balkan region as such, as well as calculating Albania’s progress in its domestic life and in the international arena, as well as the general intensification of our bilateral relations. We are intensively developing political dialogue, cooperation in the framework of activities in international organizations, primarily in the UN, the Council of Europe, the OSCE as well as trade, economic, cultural and humanitarian cooperation.

“The volume of Ukrainian-Albanian trade is approaching 40 million US dollars,” he said regarding the economic and political relations between the two countries.

(Full text of the interview is at www.argumentum.al the section in the Albanian language)