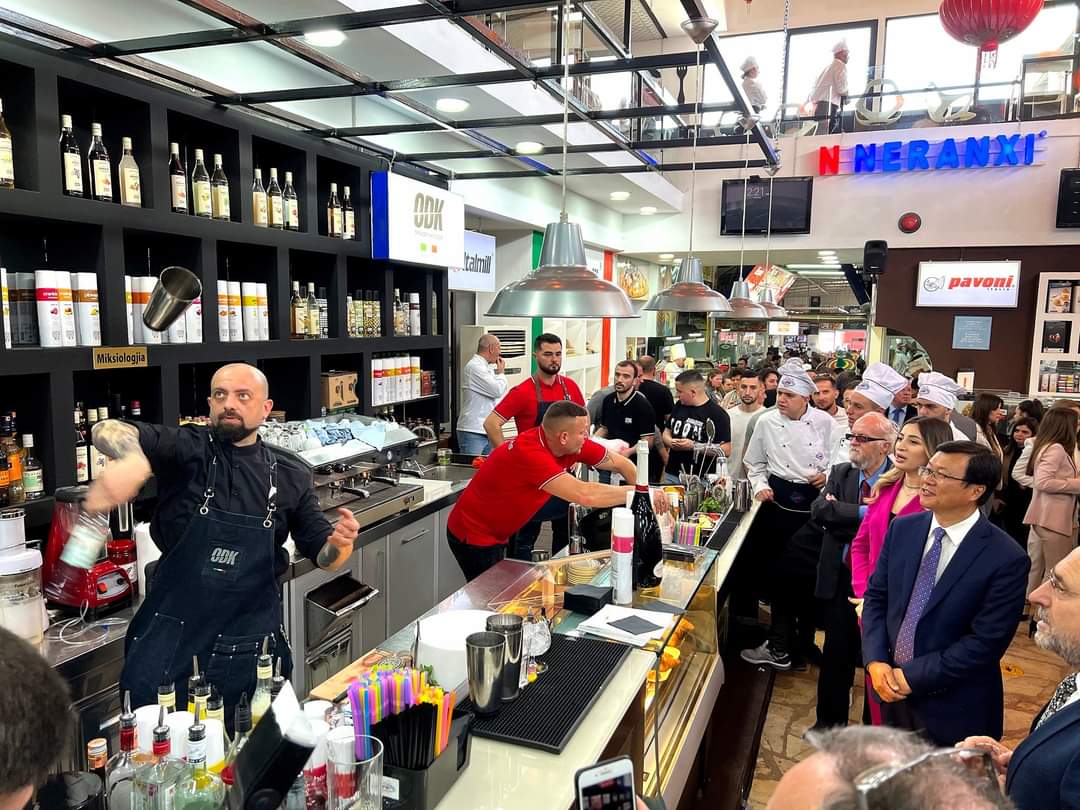 “This is the 15th professional culinary fair organized by Neranxi Company. Embracing the best tradition of developed western countries, as this tradition is lacking in Albania, we started to organize professional events in our business premises in 2008. Since that time and until today, the Neranxi brand has evolved, achieving the most unimaginable progress for all of us,” said the President of the Neranxi Group, Nikollaq Neranxi at the opening ceremony of the Food Festival 2022 held at the premises of the company in Tirana on Saturday.

Besides hundreds of citizens most of whom customers of Neranxi Group, the staff, the students of the Culinary Institute, members of the Neranxi family, the ceremony of the launch of the two- day annual Festival (7-8 May, 2022) was also attended by representatives of the diplomatic corps accredited in Tirana, Albanian and regional businessmen, media representatives and other guests.

“For the first time in 15 years, Neranxi does not make this fair alone. Now it is just one of the partners of the big organizer, which is Neranxi Group,” said the President, who announced that the Company Neranxi launched the Neranxi Group brand, which encompasses all NeraMar businesses on its 30th anniversary, and now every activity launched very modestly in its infancy has become a separate business.

Neranxi Group has in its composition Neranxi Company, the largest business of the group, with 30 years of activity which operates in the food market. The NNeranxi network shops is also an ever-growing business and a great opportunity to stay in touch with customers and better understand their needs. The Neranxi market chain of organic stores is now distributed in every corner of Albania, Kosovo, North Macedonia and Montenegro.

“We are infinitely pleased that customers in any case, have had Neranxi their first choice for product quality, packaging, marketing and assistance in any case,” said Mr. Neranxi winning the applause of the hundreds of participants among whom 1000 students of the Culinary Institute.

Further he said that the Neranxi Culinary Institute, part of the Neranxi Group, is the largest culinary school in the region, which has graduated thousands of young people, girls and boys, over the last 13 years. To take care of the employment of students as well as to respond to the clients of Neranxi Company with manpower, the Neranxi Employment Agency has been created, which has been very successful, combining demand with supply in the most possible professional way.

On the other hand Neranxi Pack, which deals with the production of all food packaging, ensuring their quality but also their aesthetics according to all tastes and requirements of our customers, is also part of the Neranxi Group. “The line of printing houses of this business is constantly enriched and that is why the packaging of Neranxi Pack is so beautiful and high quality,” said Mr. Neranxi, adding that books, magazines, newspapers and any literature needed for the work is done by the staff of Neranxi Publishing House and publications are constantly increasing. The Publishing House is part of the Neranxi Group.

And for more information on a healthy diet, the Korrierishendetit.com portal, part of the Neranxi Group, has been operating for 10 years.

In the meantime, according to him, Neranxi has chosen very famous western companies to cooperate. “Of course, we have done a detailed market study to reach the international brands that we have today as representatives. But the more we work with them, the more we realize how lucky we are, not only us as a business, but especially the Albanian consumer. These well-known brands that have been entrusted to us for the Albanian and regional market, make continuous studies to perfect the products or raw materials,” he said.

Numerous culinary novices produced thanks to the progress of science were displayed in the Fair, which could be tasted by the visitors for two days in a row.

“The first thing worth mentioning regarding Neranxi Food Festival 2022 is the enrichment of the range of 100% organic products for each sector. At a time when we are threatened by viruses, war and lack of basic food, Neranxi Group has worked hard so that the Albanian consumer does not lack any of the food products without affecting the quality. On the contrary the quality has increased. We have brought to this fair for you flours and mixes with which you can make organic dough products and you can expand the range of products in your stores,” said Mr. Neranxi, who noted that confectionery has taken on a whole new dimension and with the bio raw materials of confectionery the products are delicious and with nutritional value.

“Each pavilion is a curiosity in itself and an exploration of the culinary trends of 2022. We want the customers of Neranxi Group to have the same service and quality as in the best hotels and restaurants of the west because we really lack nothing,” President Neranxi said concluding his opening speech with the appeal: “Quality in our work means satisfying the needs of the client, even exceeding his expectations, working to get perfected every day. Only by working according to this philosophy, will success be our companion!”

The son of Mr. Neranxi, Mihail cut the ribbon of the inauguration of the fair and a fantastic colorful view unfolded in front of the visitors like in a movie. A large number of different culinary items and drinks pleased the taste of the visitors who were amazed because it was not just a place to eat but to enjoy the atmosphere. They could talk with the best chefs from different countries of the region and beyond, with students who were eager to speak of what they were learning and their dreams for the future, with specialists and managers who were ready to answer any questions.

Two Montenegrin businessmen, who had come from Podgorica a few hours before the launch of the Festival, said they could not believe that such a ‘culinary castle’ existed in Albania. It was their first visit to their neighboring country, Albania. “We will come and the first stop will always be the Neranxi Group,” they said.

After enjoying his visit to the Festival during which he had a lively conversation with President Nikollaq Neranxi, the Chinese Ambassador, Zhou Ding took to the Facebook on Saturday showing a lot of photos of the fair and writing his impressions that follow: “Neranxi Food Festival 2022, an international culinary fair that is very diverse and fantastic. Traditional Albanian and other European foods, pastries, alcoholic beverages, even Chinese food, are very impressive. Diverse foods and drinks are an important part of the rich Albanian culture and add to its beauty. I look forward to cooperating with various Albanian companies to promote the exchanges of Eastern and Western food cultures, to make the life of the Albanian people richer and happier!”

A two-day unforgettable celebration at the 15th Neranxi Food Festival 2022 has been another outstanding demonstration of the remarkable achievements of this huge enterprise not only in the culinary field but becoming a cradle of knowledge and learning for Albania’s future chefs. Leaving the fair you cannot help thinking what dedication, hard work, loyalty and trust in the customers could produce. And all these features are interrelated harmoniously in the imaginative and passionate and untiring figure of the businessmen, Nikollaq Neranxi, who turned a small herb shop into a food castle – the legendary Neranxi Group!