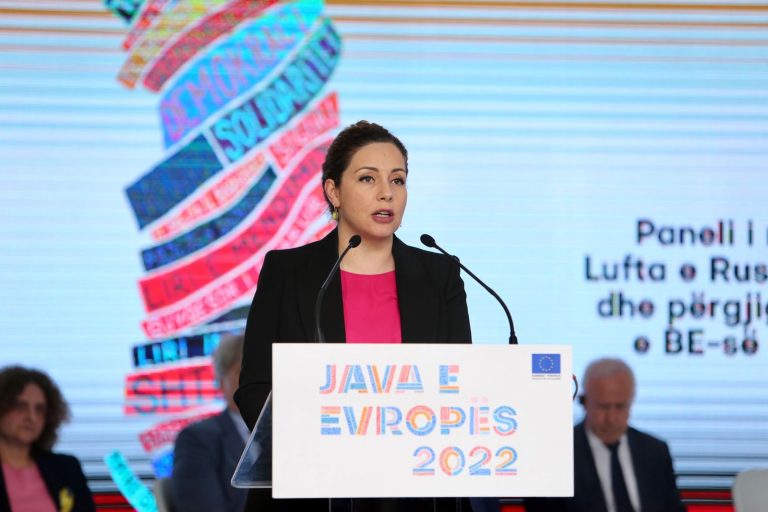 TIRANA, May 9 – Foreign Minister Olta Xhacka participated on Monday in the high-level panel: Russia’s war on Ukraine and the joint reaction of the EU and Albania, organized by the foreign ministry and the EU delegation to Albania on the occasion of Europe Day.

Ambassadors of EU member states in Tirana were present at the event. In her speech, Minister Xhacka emphasized that May 9 has become an important day in the Albanian calendar for decades.

According to her, it is a day with a very special meaning for Albanians compared to the way this day is perceived in the EU, because it is not just celebrated in Europe, but above all the dream to become part of Europe on May 9.

Albania’s top diplomat noted that it is enough to recall the situation in which the region was in the 1990s to understand how extraordinary this transformation has been. “For most of that decade the situation in what is now is called the Western Balkans was more similar to the situation in Syria or Ukraine today under Russian aggression than to the reality that this region is experiencing today,” Xhacka said, recalling the bloodshed and horrors of the wars of disintegration of the former Yugoslavia, ethnic cleansing, concentration camps, massacres and war crimes in Croatia, Bosnia and Herzegovina and later in Kosovo under the attacks of a criminal regime like that of Milosevic.

Xhacka said the polls consistently show the support of Albanians for European integration at over 90 percent.

“We Albanians have really many reasons to be grateful to the European Union. Albania and our region as a whole are the best proof of the transformative power that the European dream has when combined with a proper and strategic approach,” said the FM. /Argumentum.al