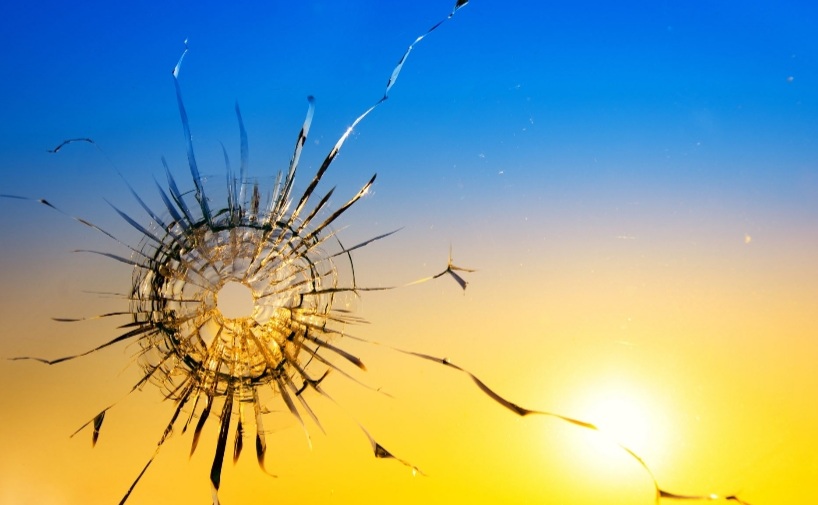 We have all heard the adage that a butterfly flapping its wings in the Amazon could affect the weather patterns on the other side of the planet. May the war in Ukraine also have such unintended consequences?

While I despair at the scale of the humanitarian disaster in Ukraine, this article explores the possibility of unexpected and unforeseeable effects beyond the Ukraine’s borders, including the possibility of more people dying of starvation in other parts of the world than as a consequence of military action in Ukraine.

The three main possible transmission mechanisms for this butterfly effect include: (a) disruption of supply chains, particularly in agriculture; (b) energy supply disruptions and (c) monetary effects. These trends often reinforce each other. All were already underway before the war; the war seems to aggravate and catalyze these effects.

a, Disruption of supply chains, particularly in agriculture

Global supply chains were already under strain, independent of the Ukrainian war, partly due to Covid-19. For example, 30% of the world’s containers are now at a standstill, waiting around ports, due to the disruption, with most of them stuck near Shanghai, locked down by Covid.

The Ukrainian war adds a big additional dimension to the supply side challenges, particularly as related to agriculture. As the chart below shows, Russia, Ukraine and Belarus account for a substantial percentage of production of the main agricultural commodities. 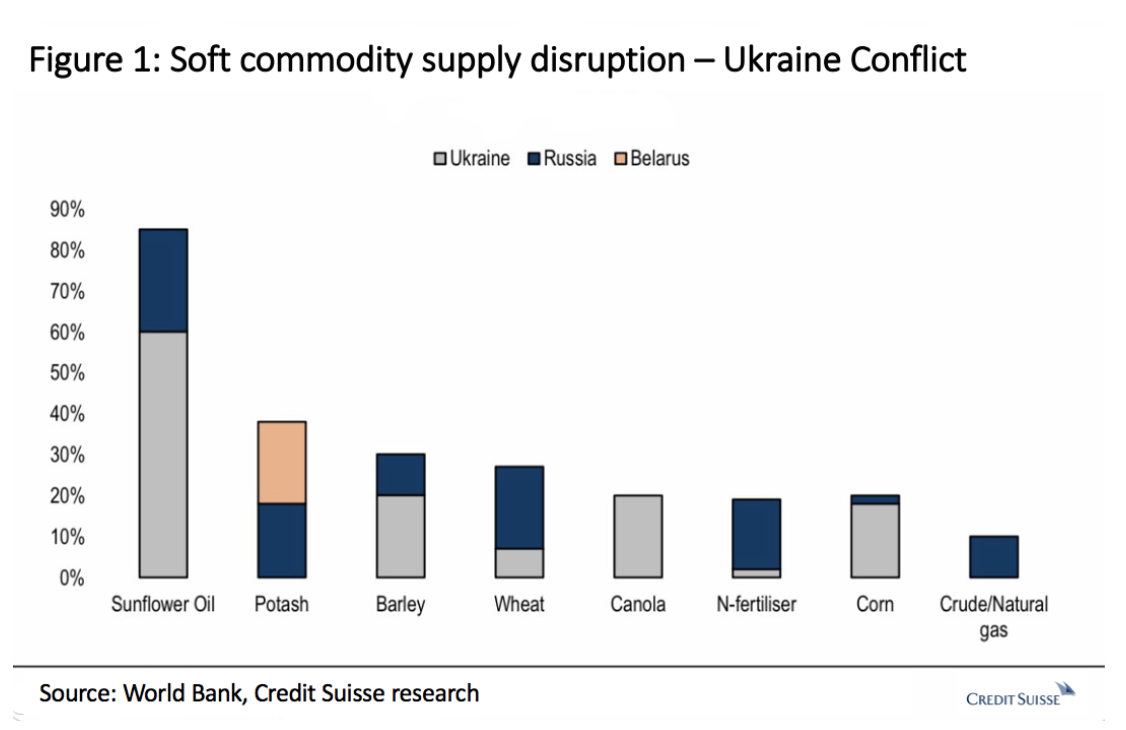 To make matters worse, a very large percentage of the above-mentioned exports go to emerging markets. Countries such as Lebanon and Egypt (the world’s largest importer of grain), as well as the entire sub-Saharan region, are highly dependent on Russian and Ukrainian exports. But also in the microchips sphere—did you know that two Ukrainian factories supplying neon for production of lasers that make microchips were closed due to the war?

The Ukrainian war has further reinforced tightness in oil and gas markets—which has had a considerable effect on hydrocarbon prices globally, particularly in Europe. Given that ammonium fertilizer is made from gas, and almost 40% of global potash exports from Russia and Belorus (as shown in the graph above), the world will see a sharp reduction in use in 2022. Many producers of ammonium, including the largest in Hungary, have stopped production altogether, due to volatility of energy prices. 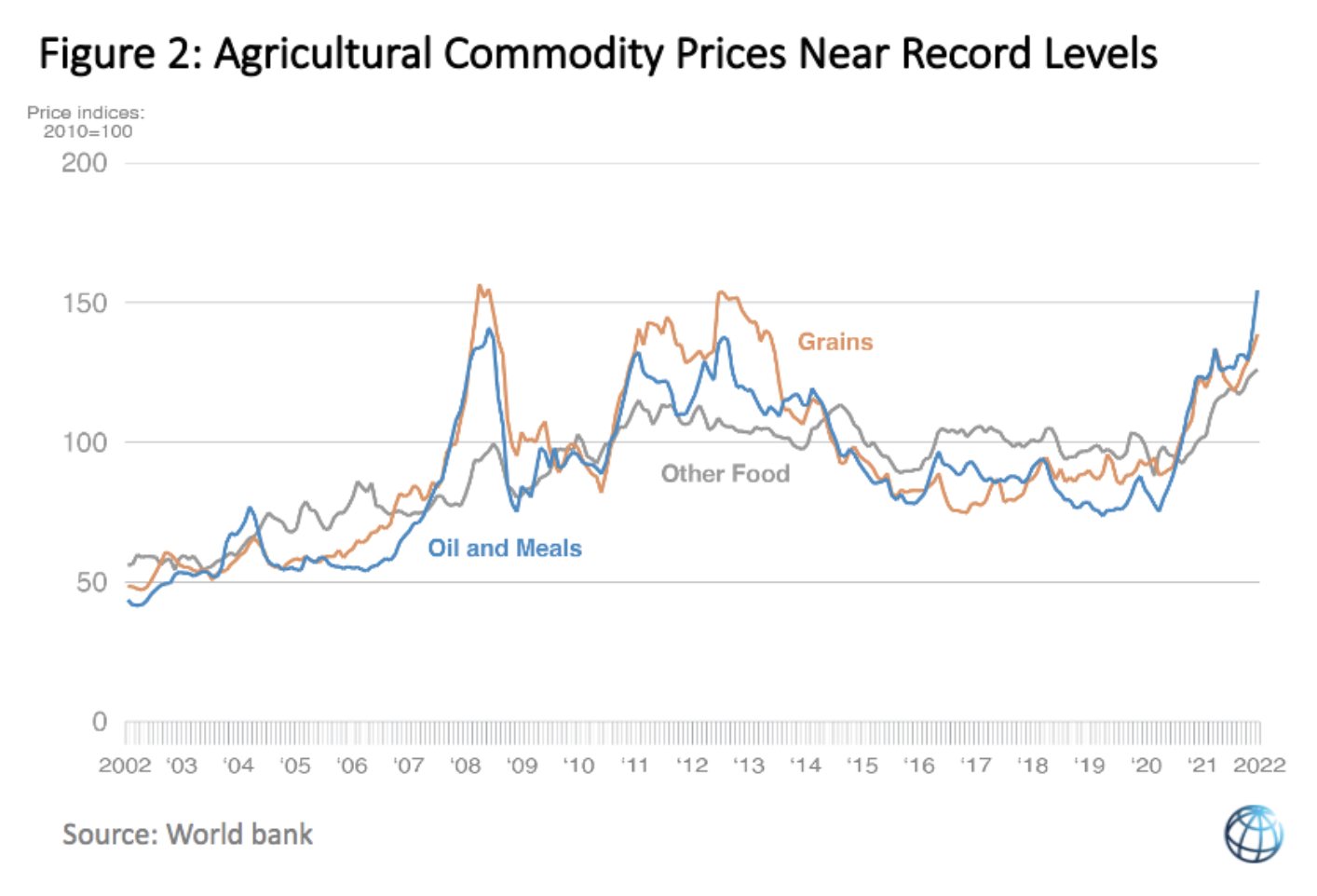 The aforementioned supply chain issues and commodity price increases have all contributed to accelerating inflation. This, in turn, has mobilized several central banks towards monetary tightening. Much has been written about the difficulty central banks will have in reducing inflation without causing a recession, while they target the fabled “soft landing”. Never have current inflation levels been cured without inducing a recession. The ongoing problems of Covid (and associated lockdowns) and the Ukrainian war (and associated sanctions) further complicate Central banks’ efforts—to use the expression—like taking a camel through the eye of a needle.

Chair Powell of the US Fed, has announced his intention to carry out what would amount to the most severe monetary tightening since the early 1980’s. This would likely take 10-year Treasuries rise from under 3% to well over 5%.

Emerging market banks are highly exposed to sovereign debt (usually bonds of their own national Governments): 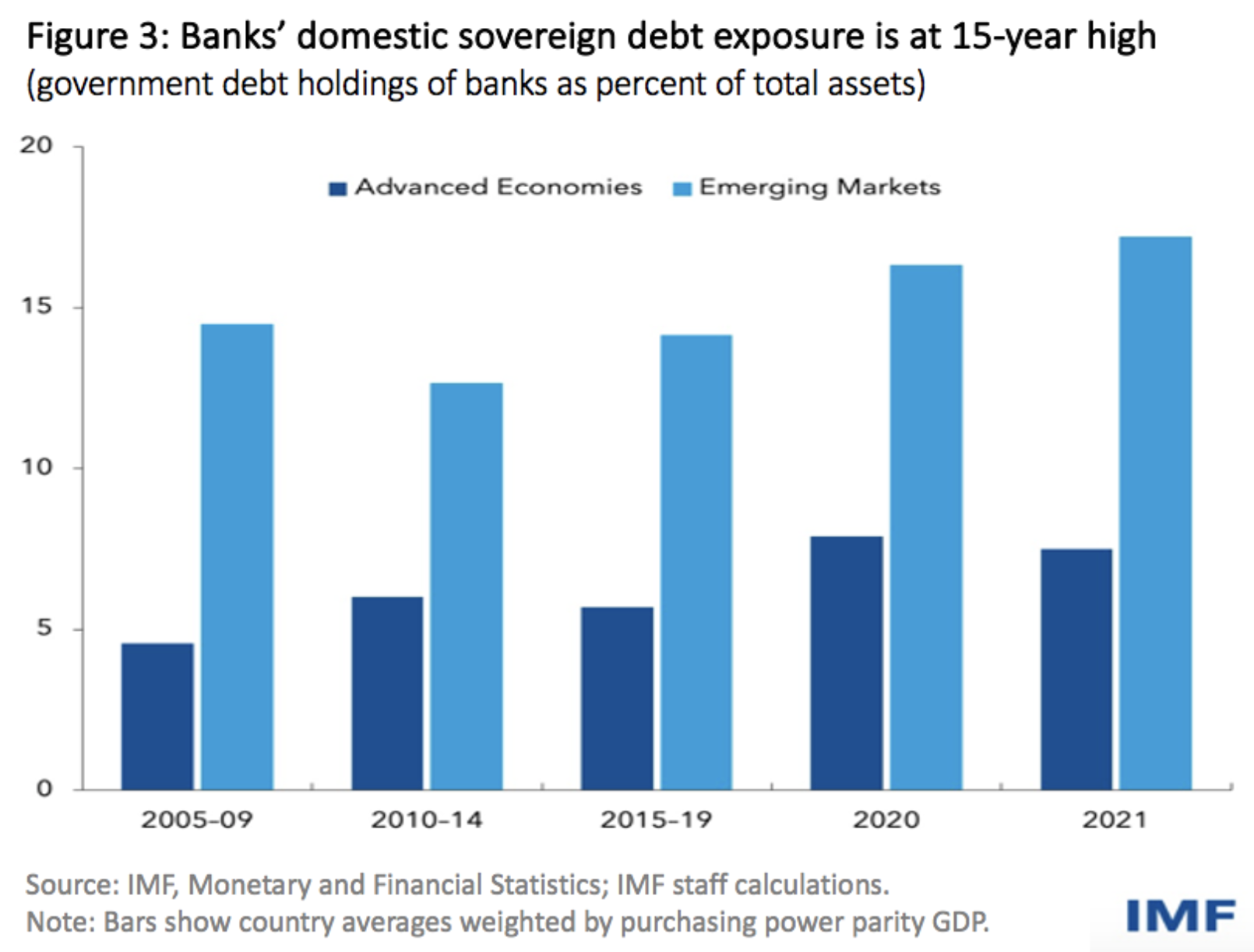 Unfortunately, the average person in emerging countries already spends a huge percentage of their income on foodstuffs and owns very few assets that might help withstand inflation. It is the average person who will feel the brunt of the phenomena discussed in this article. Remember that it was food shortages that triggered the Arab Spring roughly a decade ago.

The butterfly effect is hard to prove, but over time, the Ukrainian war may actually cause more deaths from starvation in the world’s poorest countries than war deaths Ukraine.