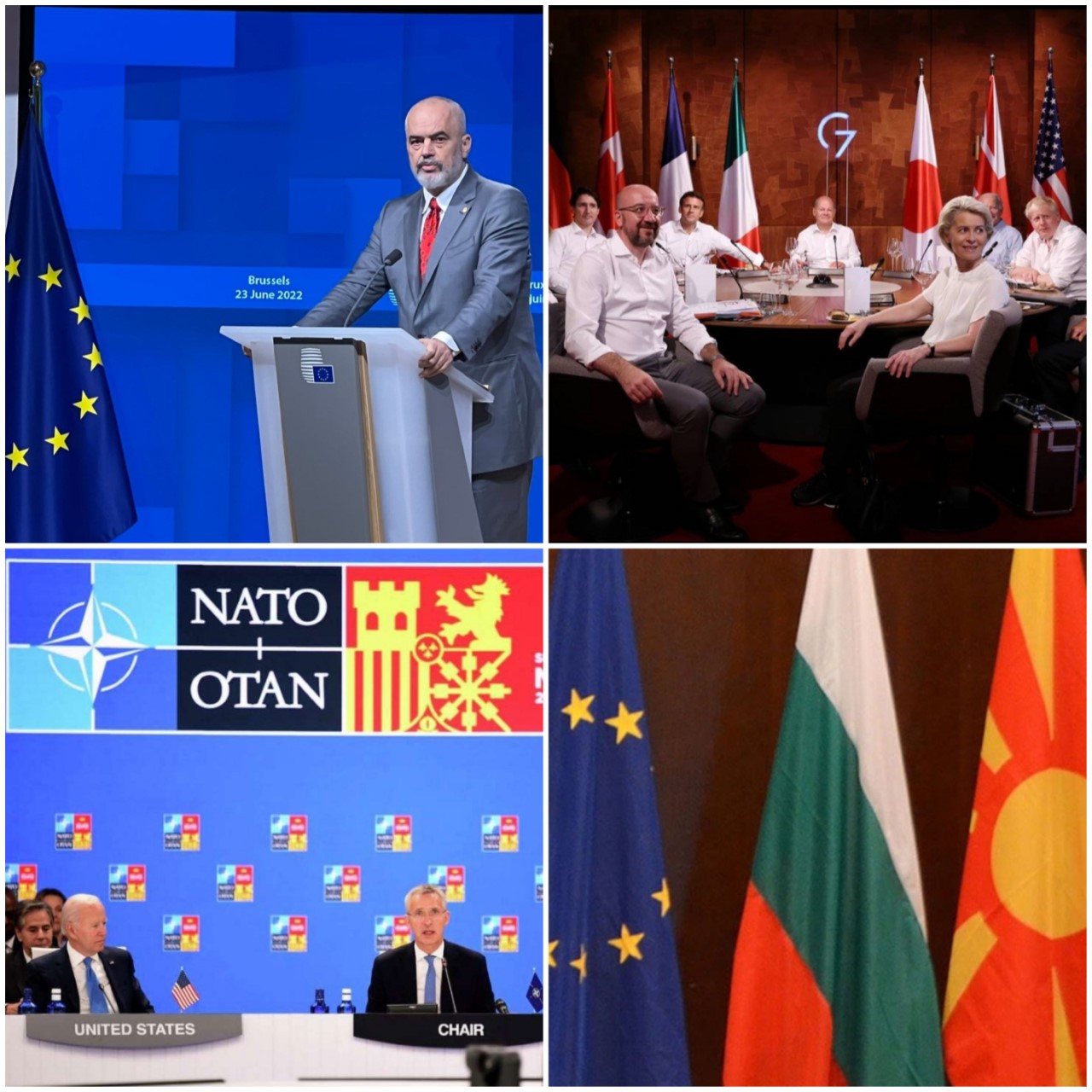 1.In 10 days, 4 summits for Ukraine took place – the EU Summit with the presence of Western Balkan leaders in Brussels on 23-24 June, the G – 7 in Elmau Castle in Bavaria, on 27/28 Qershor, NATO Summit in Madrid on 29/30 June and the Ukraine Recovery Conference in Lugano, Switzerland, on 4-5 July.

They have a common denominator- continuation of the help and solidarity with Ukraine in the political, economic, financial, military and humanitarian areas. In Brussels, they decided to give to Ukraine  the EU Candidate status,  in Elmau they ageed to increase the multifaceted assistance, in Madrid to step up the military aid in all forms, whereas in Lugano, over 40 states decided to deliver a package of 750 Billion Euro for the reconstruction and reforms there. Thus, the Western Alliance showed in full consensus its best side, it condemned the Russian agression and displayed its determination to defend Ukraine and the western democratic values at every cost and price.

2.Deter and defend! This is the new political and military NATO doctrine adopted in its historic Summit in Madrid. It is also the essence of its new strategic concept for the upcoming 10 years. It intends the political and military deterrence of Russia and China, by strengthening and expanding the defence capacities of NATO Member States, modernizing its armamenent, increase military expenses over 2 per cent  of the GDP, extend its military presence in the former Eastern European states with 400.000 troops from 40.000 currently, dislocate new reinforced military units, starting with Bulgaria, with the participation of Albanian military as well and so on.

An integral part of this deterrence strategy is the NATO accession of Sweden and Finland. Thus, NATO will very soon have 32 members, extending and strengthening its security perimeter with Russia, 1300 km more only with Finland. As they say, Russia “ went for wool but is coming back shorn” since  it demanded the withdrawal of NATO from the East but the opposite is happening.

The new NATO strategic concept represents a paradigm shift as compared to its strategy adopted in 2010, when Russia was considered almost a partner, and the logo was “ security with Russia”

3. A veto that overthrows government(s)!  Yes,  this is occurring with the Bulgarian blockade on the opening of negotiations with Northern Macedonia. Finally, official Sofja lifted its veto, but with explosive conditions on its neighbour. Besides, shortly before this veto was lifted, the government fell after the motion of confidence tabled by former PM Borisov; he decided with his Party to lift the veto against Skopje, which he himself had placed two years ago. Before him, a small party left the government, accusing PM Petkov for softening its stand vis à vis Skopje. Now Bulgaria is again closer to early elections after three previous ones last year. Despite that, lifting the veto is not yet yielding results. Because Skopje should first agree with the French proposal and Sofja with its proposed amendments. But this is easily said than done. The conditions and amendments are for both sides very hard to translate in practice; they constitute the ”ADN” of Northern Macedonia, its history and language. The opposition there has warned it will stage strong massive protests if the French proposal would be accepted. Then, no one knows what may happen. For the time being, we have to wait and see the results of the consultations with the Parliament and other relevant actors and factors for such a “ hot political potatoe”. Under these circumstances, one can neither exclude the fall of the government in Skopje, putting the country into an institutional deadlock. Accordingly, the cost of the Bulgarian veto even when lifted  could be exceptionally high and even unaffordable. Let us wait and hope for the best.

4. A strange speech and ultimatum  was considered the one that PM Rama delivered in the EU Summit in Brussels on 23 June.With a harsh language, without diplomatic coating, full of critical remarks, beats, insinuatoins and insinuatinos, beats, whits and sharp critical remarks against the EU; making it responsible for failures in the region and drawing an unrelevant comparison with Putin. Then, he qualified the Bulgarian veto as “ shame” and launched the ultimatum for recognizing “ Open Balkans” otherwise to periphrase him, the whole Europe would destabilize! Even worse, he expressed this utimatum together with Vuçiç and Kovacevski, proclaiming “Open Balkans” to be a pure political trilateral, that allegedly  represents the interests of the whole region. Although  it was not in the EU Summit Agenda! When both the EU and Berlin do not mention even the name “ Open Balkans”, since they support with funding and projects the Berlin Process, CEFTA and the  Common Regional Market. Just as before, it was neither mentioned in the Final Summit Conclusions. Even Escobar  expressed the US support, provided that “ Open Balkans” is all-inclusive and  an economic but not a political project, as it turned out to be in Brussels!

The other major strange thing is that Rama became Vuçiç’s political advocate, explaining and justifying in vain Serbia’s specific difficulties in imposing sanctions against Russia, on which Vuçiç  in fact should have rendered account in Brussels.  Thus, thanks to his Albanian “ brother’s” support, this time  Vuçiç succeeded to  “ cross the river without wetting his legs”

Besides the contents, the language used runs also against the European  spirit. This speech in some western chancelleries is labelled as “ strange”. Actually, it is a diplomaticc eufemism for the word “ absurd”. Please, make no mistake, we are very small and not mature enough to judge and teach lessons to the  EU, even less criticise and attack it in its own house in Brussels! The experience of the last three years shows that such attitudes and offensive wording have proved to be unproductive and without any result what so ever! This sort of communication may provoke the perception in Member States and institutions that hey, look, now that they have not yet opened negotiations, see what they are doing against us, what about when they are in the EU?!

*The author on 28 June 2022 was honoured by the President of the Republic with the high Title “ Grand Master” in diplomacy, economy and publicistics