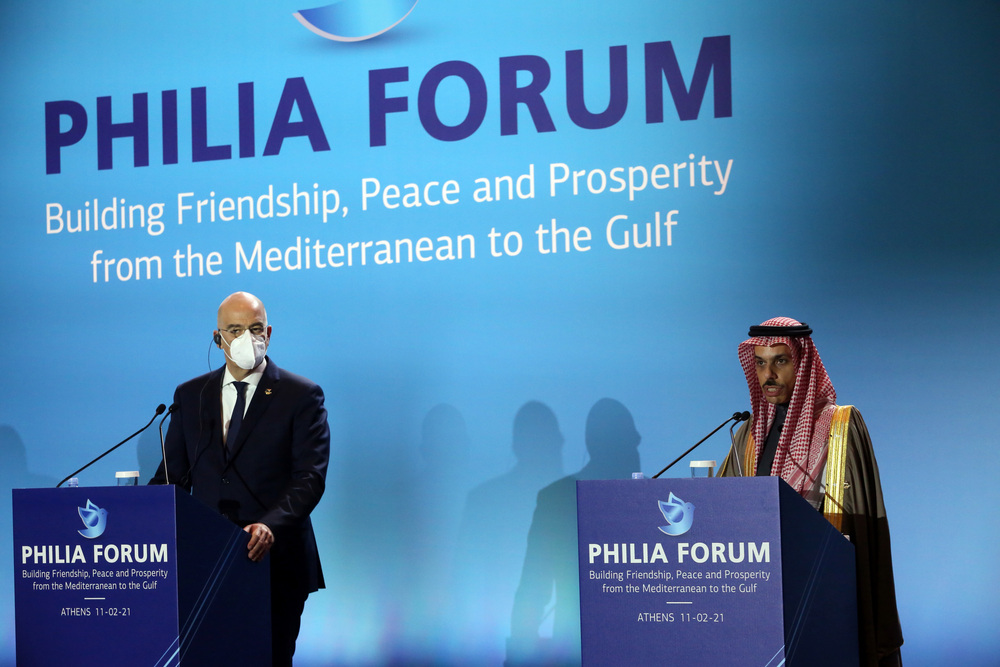 The Foreign Affairs ministers of East Mediterranean countries who took part in the “Philia Forum” reiterated their commitment to International Law, to strengthening collaboration, and to demonstrating solidarity during the coronavirus pandemic, in a joint statement after the conclusion of the Forum on Thursday.

The one-day Forum met for the first time in Athens after a Greek Foreign Affairs Ministry initiative, and the statement was signed by FMs of Cyprus, Egypt and Greece, along with their counterparts of Bahrain, France and Saudi Arabia, and the Minister of State for International Cooperation of the United Arab Emirates.

Focusing on an exchange of views on issues of common issues, they said the Philia Forum would act as a platform “with the aim of further strengthening (our) cooperation and actively contributing to the consolidation of peace, stability and security in the wider region.”

Participants reiterated their commitment to “International Law, including the UN Charter, UN Security Council Resolutions and the United Nations Convention on the Law of the Sea (UNCLOS),” to which they are all signatories. This included their respect of the sovereignty, sovereign rights, independence and territorial integrity of states, the peaceful resolution of differences and rejection of threat or use of force, the non-interference in other counties’ internal affairs and the freedom of navigation.

Following the economic repercussions of the pandemic, and the need for solidarity, they said in their statement, “we expressed our readiness to promote result-oriented exchanges, as well as joint actions and initiatives in such fields as energy, innovation, digital economy, civil protection and people to people contacts.” They also explored possibilities for further cooperation in science, agriculture, food security, academic education and training, interfaith dialogue, culture and sports.

Participating FMs also exchanged views on major international and regional issues, including developments in the Middle East peace process, the Cyprus issue, Syria, Libya, Yemen and the Eastern Mediterranean, and said they agreed to use the platform of the forum, which will be known from now on as “Philia Forum – Building Friendship, Peace and Prosperity from the Mediterranean to the Gulf.” The Forum, they said, will be “effective, yet flexible and open to other countries of the region and beyond.”/ANA-MNA