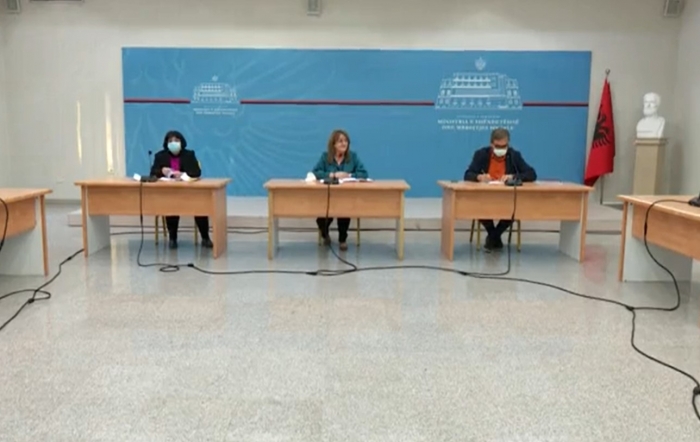 The restriction measures of 2 weeks ago have given effect and they will remain in force in Albania. Under this claim the Committee of Experts, a medical authority to administer the COVID19 pandemic, decided on Thursday that the curfew imposed earlier will remain in force starting from 20:00 to 06:00 in the morning.

Last Wednesday 19 fatalities were reported taking the death toll to 1,377 since the outbreak of the pandemic last March in Albania while the number of the daily infected varies from 1000 to 1,200 in the course of the last two weeks.

“The measures that were proposed two weeks ago have begun to give their effect, and we will assess more closely in the shortest time the effectiveness of this downward trend. So I repeat the measures that continue to remain in force are those of restricting the movement of citizens, starting from 20:00 to 06:00,” said Rakacolli, who is also deputy health minister.

In the meantime she said that high schools in those places which were designated 2 weeks ago will continue to be online. Universities will be online besides in cases of the combined exams. “Flights to the UK continue to be suspended,” Rakacolli said, launching a call to citizens to continue to adhere to hygiene measures and rules as the situation is delicate. Anyway she was optimistic about a slight tendency of infection reduction.

The Director of the National Health Emergency, Skënder Brataj said a positive fact is the control of infection indicators, which shows that there is a slight decrease. “Out of 2,500 calls we had in the last 24 hours, we went down to 2,300. More important is the number of hospitalizations, from 44 in January, increasing to 100, reaching a maximum on February 15 to 140. It has dropped below 100 and gives reason for optimism that the measures have given an effect,” he said.

“So the situation is under control, monitoring continues daily, we have the exact numbers in terms of hospital admissions which are 648. The opening of regional hospitals hss helped to improve the situation. The situation continues to be critical in Tirana and in other regions,” said Brataj.

Answering a question deputy health minister Rakacoli said getting on urban buses is everyone’s personal choice, while she suggested to the citizens to choose appropriate schedules.

Meanwhile, the Director of the Public Health Institute, Albana Fico said at the meeting of the Expert Committee that 79% of the cases in the last two weeks were between the ages of 24-54, appealing for extra care.

“Ages of 24-35 and 45-54 years old have an increase in the number of cases… The impact of these ages has changed and can only change if we are very careful not only with the implementation of simple measures for the rules set, but I think this is also an appeal to be clear that we have not finished this battle,” said Fico. /