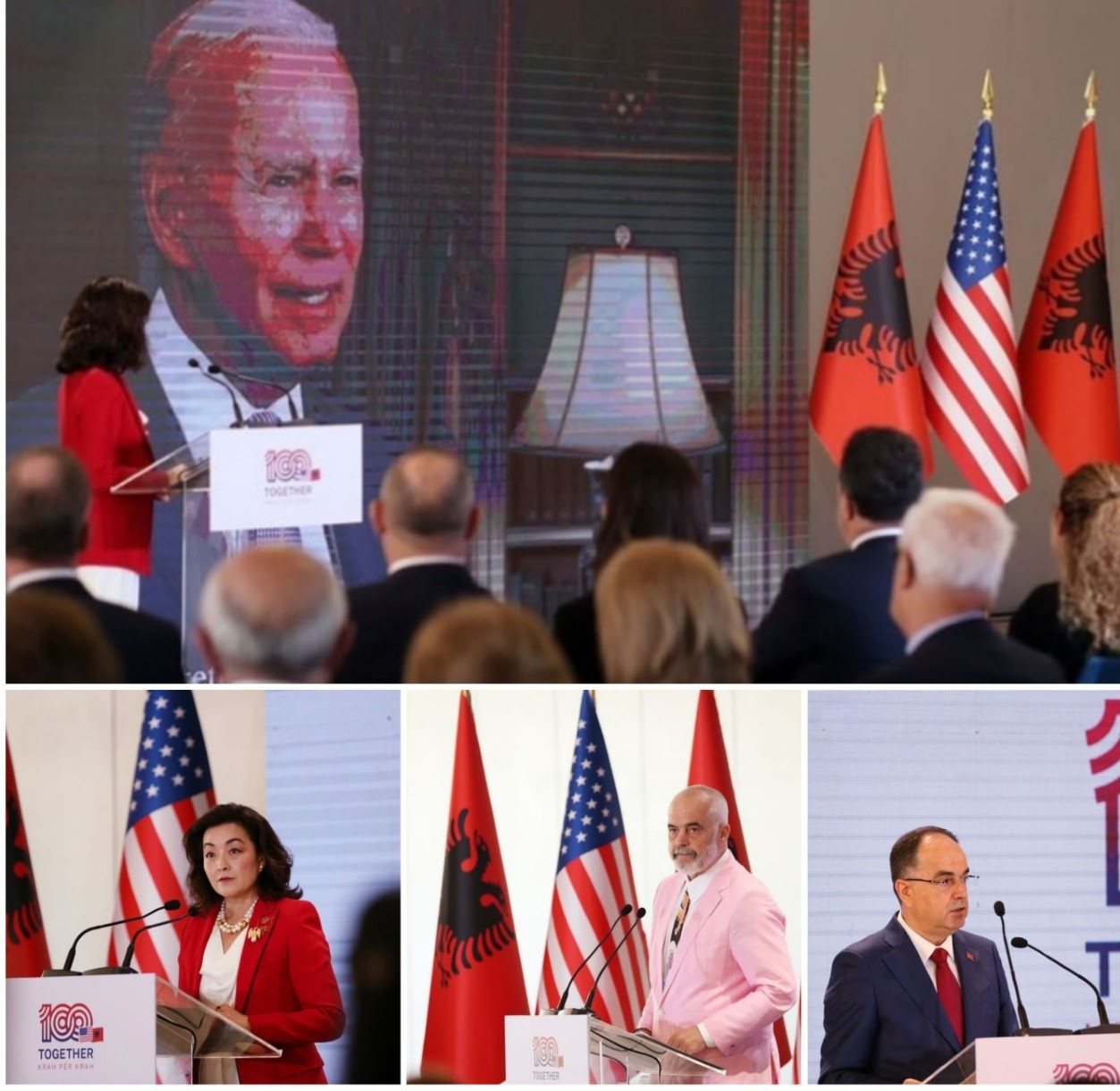 TIRANA,  July 28 – The 100th anniversary of the establishment of the diplomatic relations between Albania and the United States was marked in a commemorative meeting with praises of the event and the current level of the strategic relationship in Tirana on Thursday.

The conference was attended by PM Edi Rama and US Ambassador to Albania Yuri Kim who were the main speakers as well as by President Bajram Begaj and other senior officials and former official and political figures.

According to Rama, Albania would not have as it is without the US and took the opportunity to blast the Albanian brigands whom he did not mention by name but of course he meant his adversaries rather the leadership of the ruling Socialist Party, which is a continuation of the communist Party of Albania whose foreign policy was based on keep this Balkan country isolated with US as arch enemy.

He referred to the reestablishment of the diplomatic ties which happened on March 15, 1991 a time when the US was still the target of curses by Socialists descendants of the Party of Labor of Albania.

Today, there are countless reasons why, based on the history of these 30 years, this is an irreplaceable strategic relationship and the reasons why we should endure with a smile, and even with pleasure, the protagonism of the American ambassadors in Albania, said Rama.

“Finally, I want to say that it is truly an honor and a privilege that we have managed to sign a strategic partnership agreement with the United States of America and that recently, a few days ago, we received from Washington the proposal to deepen the strategic partnership document,” said Rama whose late father was a senior figure in the leadership of the ruling hierarchy of the communist party.

PM concluded by saying that they will make it possible for the past to never be a threat for the Balkans, but to be only a treasure of knowledge and lessons about how history should not be repeated.

In the video message addressed to the conference held in Tirana on Thursday, US President Joe Biden emphasized that the US will continue to stand by Albania in the future. He sent his heartiest wishes for the long-lasting friendship of the USA.

“When the USA defended the independence of Albania after the First World War, a permanent friendship of our peoples was created, a common love for freedom and the values of democracy which were never broken even during the decades of dictatorship. In the future, the US will continue to stand by Albania, while the country strengthens its democratic institutions, fights corruption and completes the journey to join the EU,” said Biden.

Even President George W. Bush congratulated Albanians on the occasion of the 100th anniversary of diplomatic relations between Albania and the United States of America in a letter read by Yuri Kim.

“In 2007, I was proud to be the first US President in office to visit Albania. Laura and I will never forget the time we spent in your beautiful country. We witnessed your sincere hospitality and your commitment to democracy and strong relations with the United States,” he said, adding that Albania is a force for good in the world.

“The United States has never wavered – and we never will waver – from supporting the aspiration of the Albanian people for sovereignty, democracy, prosperity, and justice,” she said.

There were many other speakers who took the floor in the Conference and most of them did not make any concrete contribution in the milestones of the history of the Albanian- US relationship.  There are outstanding figures who have been key protagonists in the reestablishment of the Albanian-US relationship as, for example, the former Foreign Minister, Muhamet Kapllani, who signed the Memorandum of Understanding on March 15, 1991 or the former Ambassador to the UN, Bashkim Pitarka, who led the talks on the reestablishment of the bilateral ties with the US side, but their contribution was left in oblivion and there is no information that they were invited to express their impressions as key protagonists of this event. /Argumentum.al