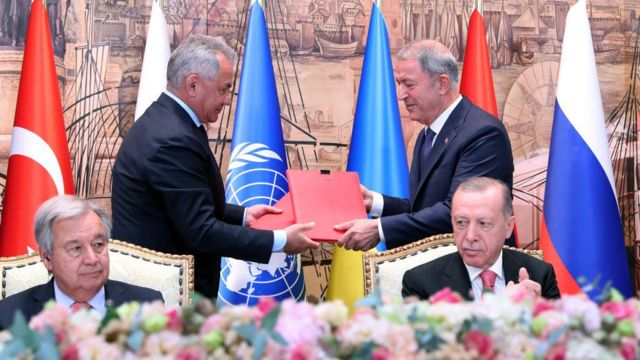 Türkiye, the UN, Russia, and Ukraine on Friday signed a deal in Istanbul to resume Ukraine’s Black Sea grain exports.

Turkish President Recep Tayyip Erdogan and UN Secretary-General Antonio Guterres attended the Signature Ceremony of Initiative on the Safe Transportation of Grain and Foodstuffs from Ukrainian Ports Document at the Dolmabahce Palace along with representatives from Russia and Ukraine.

“We are proud of being instrumental in an initiative that will play a major role in the solution of the global food crisis that has occupied the whole world for a long time,” Erdogan said.

The president added: “We will contribute to preventing the danger of hunger that awaits billions of people in the world.