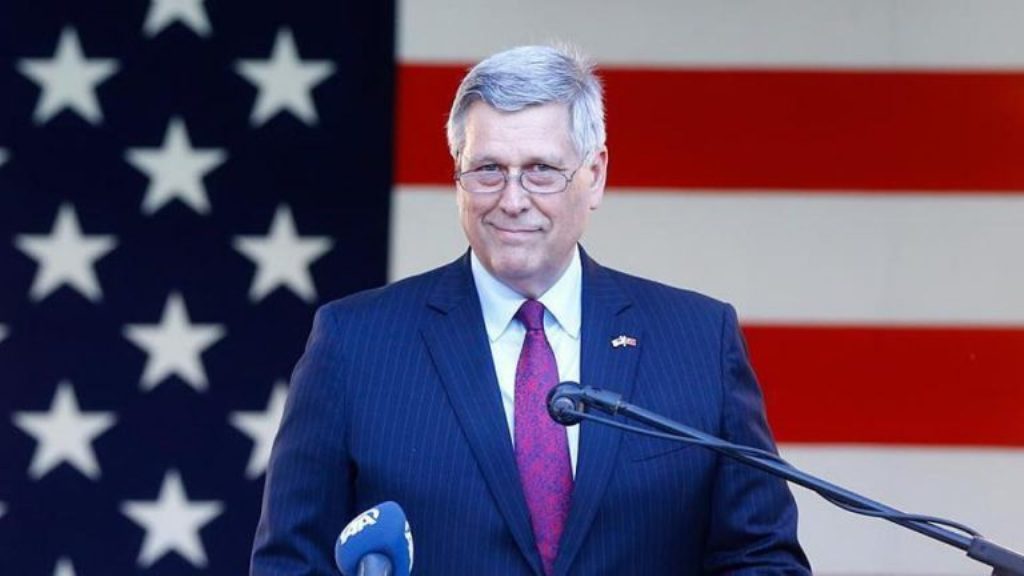 “When Mr. Kurti says the dialogue, foreign policy should be pushed down a little bit lower, well, my experience is that the world doesn’t really wait,” US Ambassador to Kosovo Philip S. Kosnett has said in his first interview after 14 February election in Kosovo with T7 show Pressing.
What seems as criticism by US top diplomat to Pristina to Vetevendosje leader Albin Kurti projected as future Kosovo PM is linked with the latter’s statement that the dialogue with Belgrade is not among his top priorities in next government.

However Kosnett said in his interview as quoted by Gazeta Express on Tuesday that he sees a strong desire of the citizens of Kosovo to give Albin Kurti and Vjosa Osmani a chance to form a government and lead the country and commended the organization of the election saying that he was impressed with the election results.
“I think they have a vision, energy, and I think that it is a very exciting time for Kosovo,” Kosnett said. He said the US Government is looking forward to having a cooperative and collaborative relationship with the Government of Kosovo.  “The Biden Administration has made it very clear, and we are not talking about Kosovo but about all of our partners, that we want to have respectful collaborative cooperation. It is a little different approach from what sometime have seen in the past,” Kosnett said adding that he looks forward to have many conversations with the new Government of Kosovo once its formed about the direction policy should take. He said that many priorities that Kurti is talking about such as fighting corruption, rule of law, creating economic opportunity are priorities of the US Government as well. “When Mr. Kurti says the dialogue, foreign policy should be pushed down a little bit lower, well, my experience is that the world doesn’t’ really wait,” Kosnett said.

He recalled the comments of the US Secretary of State Antony Blinken who said that they will not throw away all the work done in Balkans by the previous US administration. “We want to look carefully think it through, and preserve what is worth preserving,” Kosnett said. “I would also encourage other people just to keep an open mind and look together what has been done in the past that is worth pursuing in the future,” the US Ambassador said.
Kosnett said that with the change of the US administration the fundamental goals of the US for Kosovo and the Balkans do not change that much. He said their overall goal is to see Kosovo more self sufficient and more equal partner to countries in the region as well as to the United States.

He said that the new US Administration is still developing specifics of what their policy would be with the countries of the region. Asked if he expects the Biden’s administration will continue the work of Donald Trump’s administration in the region, Kosnett replied: “I would expect some tactical changes. But, certainly economic development, and regional economic integration is going to remain part of our program for the Balkans,” Kosnett stated.

“Kosovo is a very small market. It needs to be able to integrate its economy into the region. It needs to be able to integrate its energy grid into the region,” Kosnett said.
Kosnett has commented also on the so called Mini-Schengen initiative of Serbia, Albania and North Macedonia and Kosovo politicians’ reluctance to join this regional proposal. “When we look into something so-called Mini-Schengen arrangement, many people in Kosovo are sceptical about it. Our attitude is that Kosovo needs to have its economy integrated into the region. If you don’t like this or that proposal, don’t just walk away, sit down at the table with your neighbours and decide on a way ahead. Because your neighbours need Kosovo to be part of the regional economy just as much as you need them,” Kosnett stated.

When asked whether the new US Administration will support the Washington Agreement signed on 4 September on economic normalization between Kosovo and Serbia, Kosnett said: “The commitments made in Washington still stand until somebody says otherwise. Of course, the Biden Administration is looking at the specifics of Kosovo-Serbia relations. It is possible that some of the initiatives mentioned in the Washington commitments will change,” Kosnett said adding that their overall thrust is to see Kosovo and Serbia strengthen their economies. “We want to see Kosovo’s economy integrated more into the region. That we want to see energy planning on the regional basis, I do not think any of that is going to change. And if you look at the big picture, we are in the right direction,” Kosnett said. He said that he does not know yet whether the new administration will appoint a special presidential envoy on Kosovo-Serbia dialogue, such was the case with previous administration of Donald Trump who appointed Ambassador Richard Grenell as his special envoy on Dialogue.

Kosnett has commented also statements of Albin Kurti and AAK leader Ramush Haradinaj who during election campaign have brought to public discourse the debate on national unification with Albania. Ambassador Kosnett said the US vision for Balkans is not the Greater Albania or Greater Serbia. According to Kosnett Kosovo’s Constitution calls for Kosovo to be a multi-ethnic country. “It would be difficult for any American government to think that the answer to peace in the Balkans lies in just separating everybody by ethnicity and building walls. We need to build bridges and not walls,” Kosnett told T7. Kosnett said that Kosovo’s future does not lie in isolation.
“Kosovo needs to be part of greater Europe, not just Greater Albania,” US Ambassador said. /argumentum.al