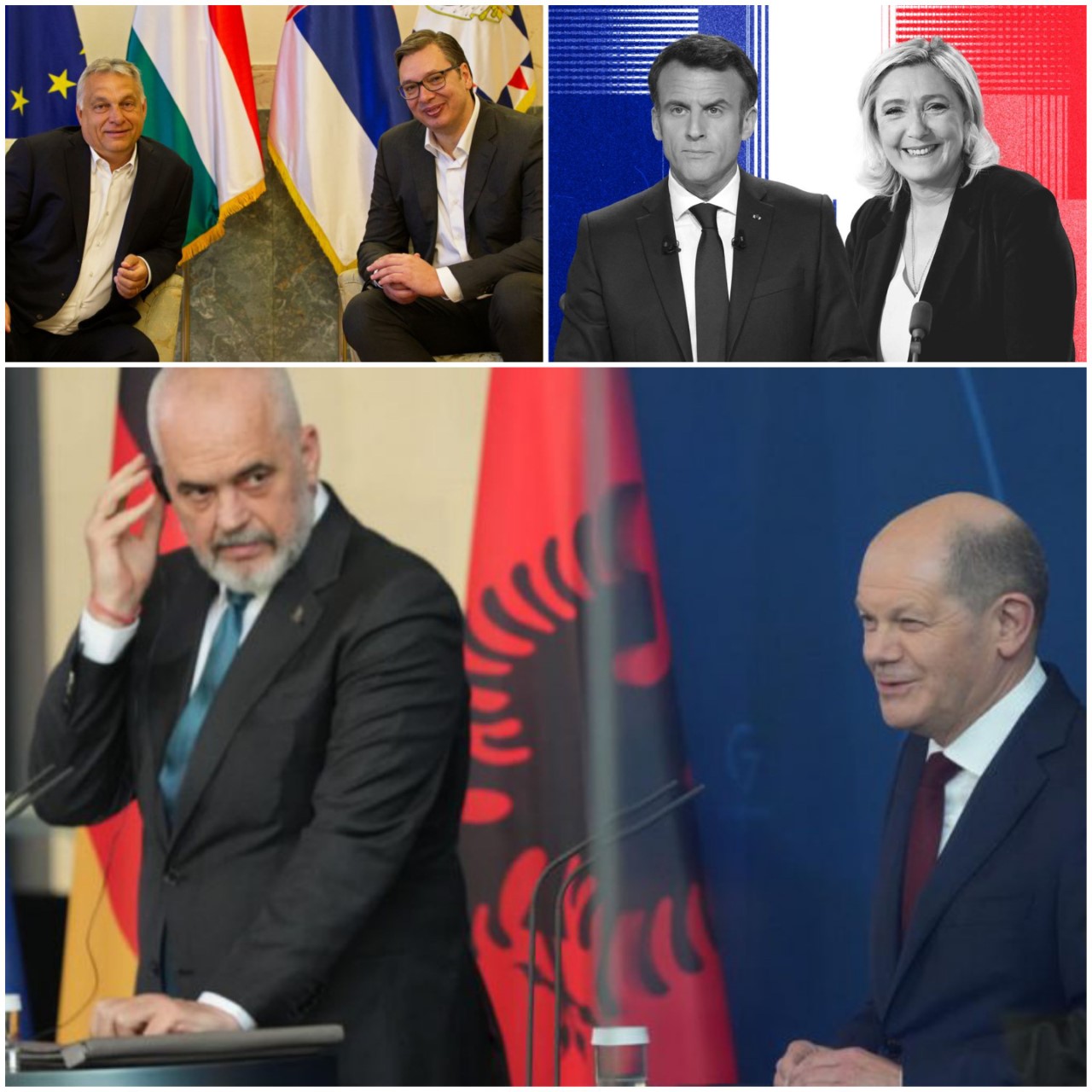 1.Putin “ wins” in Belgrade and Budapest!  This is a common tittle in the international press after the parliamentary elections in Hungary and Serbia on 3 April. Actually, the two well-known leaders, Orban and Vuçiç won a land sliding victory, for reasons which are also mentioned at ARGUMENTUM. It is common knowledge that they are Putin’s allies and friends. Although Hungary is member of the EU and NATO, it is building up “ illiberal democracy” openly defying the EU. Both of them have not imposed sanctions against Russia. Certainly, they have justified this claiming they are neither in favour of Russia nor Ukraine, but they stand for Hungary and Serbia!. As to Belgrade, it “grazes in the western pastures” but also in those of China and Russia. This is why  Orban and Vuçiç victories are widely considered as Putin ones. Ironically, they are more than “ headaches” for the EU.

2.The Battle for Elysée, the official seat of the French President is the official logo of the present presidential elections in France, whose first round ended up on 10 April with the victory of Emmanuel Macron. However, as he did not win the absolute majority, on 24 April, he will run again against Mme Marine Le Pen, the nationalistic  leader of the right extreme  “Rassemblement National”. However, the 24 April exceeds the borders of the Presidential Palace in Paris. Elysée will be the major battle field for France and the entire Europe.

This is because the  53 years old  Marine Le Pen, leader of the largest right extreme  movement in Europe is recognized for her hostile stances against the migrants, western values, multilaterism and especially the EU and NATO.

Despite some changes of tactics, the foundations of her anti-EU and NATO remain unchanged. Now she wants to remake the EU, demolish NATO and the traditional relations with Germany, as the  EU “engine”. Her danger lies also in the fact that as a typical populist leader, she mainly criticizes, denies, denounces, and promises the skies, abusing with the  problems and difficulties in the every day lives of the French.

Whereas President Macron and his  “ La  Rèpublique en Marche” represents the most European part of the french society and politics. During his five years in  Elysée he has proved to be a brilliant manager of the hard situations and a champion of the democratic values in exceptional periods. After Merkel has left out, he is the only experienced credible leader of a great country that together with Germany and other states will take up in his hands and prromote the destinies of the EU and NATO together with the USA and other allies.

Macron’s victory on 24 April would be a severe blow to the populist and extreme forces in France and Europe.  In the foreign policy, his victory would have positive impact in strengthening multilaterism, UN, EU and NATO. He has expressed some ideas for a new Europe, which need to deepen inside before its enlargement.

Morever, these elections coincide with the French EU Presidency until the end of June; when Ukraine, Georgia and Moldova have demanded membership to the EU, apart the 6 Western Balkan states. As leader of a large state, Macron has his own right to express and give new political ideas and movements, so that the EU should learn from, avoid the mistakes of the past and respond effectively to the new challenges in all areas, particularly in defence and security.

3. The German “ NO” for Open Balkans was stated again clearly and diplomatically by Chancellor Scholz in the Joint Press Conference with PM Rama on  11 April in Berlin. Certainly, one could not expect from Chancellor Scholz who speaks only affirmatively to say bluntly “NO” to the high guest from  Tirana, even less in their first introductory encounter. The World and Germany, in particular, have learned long ago how to say  a slow and diplomatic “ NO”. There is  no surprise here, and PM Rama would have been much better not to mention this issue. Because this NO has been expressed even before in Tirana very softly by Chancellor  Merkel and other senior german officials. Mr. Scholz during that time was Vice  Chancellor. So, there is no reason for him and Berlin to accept Open Balkans; moreover, when you tell it openly that you want to replace the historic Process of Berlin, as it has allegedly failed and replace it with an initiative by Belgrade that even after over two years is still a half one! Then, why should Belgrade be the “ first fiddle” with all those problems it has with Kosovo but not only, with his friendly stances towards Russia even after its aggression  in Ukraine and moreover to show off with the EU money? This means as we say in Albania “ the sheep and goat of Zere but the fame of Hasan Qerre!”

Most importantly, however, is that both the EU and Germany, given the hot Balkan problematics have sealed down their best alternative against  Open Balkans for the accoplishment of four major freedoms in Sofia, Brdo dhe on 14 December in the official EU Summit in Brussels. In their relevant documents it is mentioned only  Western Balkans Common Regional Market, which is also accepted by the six WB states. Thus, the Half Open Balkans has become unnecessary.

4. Sofia spoke, what about Skopje? After the boring rhetorics on the opening of negotiations with Albania and Northern Macedonia this June, on 12 April finally Sofia spoke through its Chief Diplomat. She did not give any sign of hope for lifting its veto, repeating its well-known demands for Skopje. Now the ball is in the Skopje’s goal line. Not as hitherto waiting from the “big shots”, who  continue their demarshes but without automic guarantees, due to the burning issues between the two sides. Now even Skopje has to offer concessions and compromises. Otherwise,  Sofia could tell it to “ come back in autumn”; as the smallest evil, taking us also us with themselves. Beacause decoupling us from Skopje it is easily said than done; since it is only up to the EU Council to decouple us.